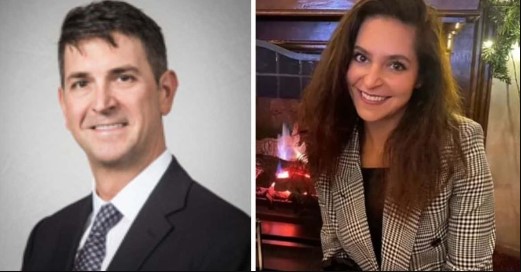 More than a dozen savage assaults by a surgeon on his ex-girlfriend are alleged to have resulted in a miscarriage, broken bones and a concussion. Ear, nose and throat specialist Dr. Joseph Finley, 53, who works for Northwell Health in New York City, is accused of repeatedly attacking his ex-girlfriend Negar Dolatabadi over a two-year period.

According to civil court documents filed in New York County Supreme Court, Finley regularly consumed enormous amounts of alcohol before brutally attacking Dolatabadi, 40, seven times. Dolatabadi, a native Iranian, is said to have suffered serious injuries over the course of two years, including broken toes, fractured ribs and a concussion. She was allegedly beaten, pushed to the ground, and hit repeatedly.

According to court documents obtained by the Daily Mail, Finley was yelling “w***e” at Dolatabadi during these violent attacks. Finley has “strongly” denied the allegations and is also on trial for assault and strangulation. Finley allegedly attacked Dolatabadi at her home a month after learning he was carrying her first child, kicking her in the stomach and throwing her across the room.

According to Manhattan prosecutors, Dolatabadi, who is a dentist, discovered that she had miscarried and lost the baby shortly after this incident. “He ruined my life and he shouldn’t get away with it,” Dolatabadi told the New York Post. “I have a lifelong injury. I have pain every night. There is not a single second that I am not aware of the pain in my foot.”

According to a Manhattan criminal court complaint, Finley was arrested on September 25, 2022, and charged with one count of second-degree strangulation, six counts of third-degree assault, and two counts of third-degree criminal misconduct. He is due to appear in court once more on February 8. The couple began dating in March 2018 and moved in together in August of the same year.

However, the lawsuit alleges that Finley severely beat Dolatabadi within three months of her move to New York while continually calling her a “w***e,” accusing her of cheating on him, and threatening to call her workplace to “let them know”. she’s a slut.” According to court records, the initial assault left Dolatabadi with bruises all over his body, broken ribs and nerve damage in his left hand.

Finley vowed to stop drinking and stayed until July 2020 . During the Covid lockdown, Finley began drinking excessively, causing him to lose control and have violent outbursts. Finley attacked Dolatabadi on July 5, 2020, as he threatened: “I will kill you. I have people in high places,” according to the lawsuit.

On the same day, Finley allegedly struck Dolatabadi on the side of the head, hitting him square in the ear, leaving the victim in extreme pain and dazed. According to the lawsuit, he remained in the bathroom for two days while vomiting and oozing fluid from his ear. After this incident, Finley allegedly began to drink more and more, eventually reaching a daily average of 1.75 liters of bourbon, according to Dolatabadi in his lawsuit.

In an assault that left the dentist with a fractured big toe in October 2020, Finley repeatedly yelled at Dolatabadi that she was a “whore” as he slammed a door on her foot. A year later, on October 4, 2021, Finley attacked Dolatabadi again, pushing her so violently that her right foot struck the TV stand, breaking the ring toe of her right foot. “Moments before breaking Dolatabadi’s toe, Finley yelled the words to the effect of ‘I’ll get you thrown out of the country, I’ll tell the FBI who you really are’ and ‘I’ll make sure you never look that bad.’

same thing again,’” the court document states. Finley allegedly attempted to strangle Dolatabadi as she yelled, “If you hurt my career, I have to kill you. Do you know that right?” Finley also violently knocked Dolatabadi to the ground on December 17, 2021, causing her to sustain further injuries to her previously broken toe.