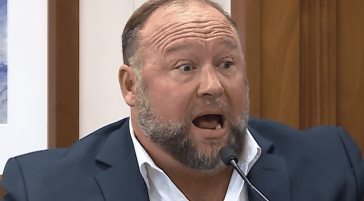 A Connecticut court ordered Alex Jones to pay $965 million to the families of the victims of the Sandy Hook massacre on Wednesday, October 12. The conspiracy theorist repeatedly claimed that the 2012 mass shooting was a media fabrication. He even said that the grieving families seen on the news were actors hired as part of a plot to take people’s guns away, The Guardian claimed.

However, according to Vanity Fair, Alex claimed after the verdict: “Do these people really think they are getting any of this money?” He then added, “This must be what hell is: They just read the damages. Even though you don’t get the money.” Further, he said, “They want to scare everyone away from freedom. They want to scare us away from questioning Uvalde and what really happened there or Parkland or any other event.”

He further stated: “We are not afraid, we are not going to leave and we are not going to stop… For hundreds of thousands of dollars, I can keep them in court for years, I can appeal this, we can stand up against this farce, against the thousands of million dollars they want. According to the New York Post, the complainants, who are members of the Sandy Hook family, claimed that Alex benefited from his enormous suffering.

He previously denied that gunman Adam Lanza fatally shot 26 people at the elementary school and then himself in December. 14, 2012. During the trial, however, he agreed that he had been wrong about Sandy Hook and agreed that the shooting was real. Attorney Chris Mattei said, “Each of these families [was] drowning in grief, and Alex Jones put his foot on them,” the New York Post reported.

The new verdict came after three weeks of testimony in another court. in Texas, which ordered to pay only a sum of $49 million to Jones. Meanwhile, in this case, the plaintiffs included more than a dozen family members of 20 children and six staff members who were shot to death at the Elementary School Sandy Hook in December 2012. However, Infowars has already filed for bankruptcy, reports Variety.

In an interview with MSNBC, Harry Litman, a former federal prosecutor, said, “We’re talking about such huge numbers that even if he’s able to swing and weave a few, I just don’t see how it ends up in anything, but he’s basically broken now.” for the rest of his life,” meanwhile, economist Bernard Pettingill Jr. estimated that Jones has a net worth of between $135 million and $270 million, Vanity reports.

The verdict is the second major trial against the Infowars host for his relentless promotion of the lie that the 2012 massacre never happened, The Guardian reported. During closing arguments, Alex’s attorney, Norman Pattis, countered that the plaintiffs had shown no significant evidence or any quantifiable losses. He also said: “This is not a case about politics; It’s about how much to compensate the plaintiffs,” Reuters stated.

One of the plaintiffs in the case, Robbie Parker, stated: “Everyone who took the stand told the truth.” It was also revealed that the website in all the false information about the so-called ‘Infowars’ massacre generated revenue of $165 million between 2016 and 2018. According to the News Times, an economist who testified for the parents estimated Alex’s value at between $135 and $270 million.

He said during testimony: “I’ve already said ‘I’m sorry’ hundreds of times and I end up saying I’m sorry. Meanwhile, the lawsuit accused Free Speech Systems, which is the parent company of Jones and Infowars, of making millions from this controversial and false news story. Alex will now face another trial in a Texas court, brought by another father of one of the victims, The Guardian stated.

The Internet was quick to react to the verdict. One user stated: “Watching the Sandy Hook verdict live from his studio, Alex Jones makes an urgent appeal to his audience for cash and tells them that none of the money they send him will go to the families because he has filed a bankruptcy petition.”

One user said: “Glorious result.” Another user stated: “well done jury!” Katie S Phang said, “It’s disgusting. And he’s intentionally misleading his viewers. Trust me, those lawyers and others will be after every red penny from those lawsuits against him.” Meanwhile, one user claimed, “His bankruptcy filing will be rejected. Civil lawsuits don’t qualify. Hopefully, he’s done for.”

Another user stated: “They deserve every penny and honestly if the families could similarly sue all the InfoWars fans who stalked, harassed and trolled these poor family members it would be unbelievable. I can’t imagine their pain, unnecessarily and mercilessly increased by these well-known lies presented as truth”. One tweet read: “And these people won’t see much, if any, of it. What a joke.”

Another tweet read: “Alex Jones is now learning that no right, including free speech, is unlimited.” Another user stated: “There can never be justice for these families.” In addition, one tweet said: “They will never receive that money in full.”