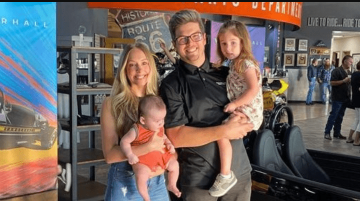 A fundraising campaign to help Kirstie Jane Bennard, who is fighting for her life after losing her two children in a fatal pit bull attack, has raised nearly $97,000. Kirstie was left with life-threatening injuries after she tried to protect her children from the family’s pit bulls in the fatal attack. The Shelby County Sheriff’s Office said the attack took place on Wednesday, October 5, 2022, in western Tennessee, outside of Memphis.

The 30-year-old mother suffered serious injuries after she tried to protect her five-month-old son, Hollace Dean, and her two-year-old daughter, Lilly Jane, but to no avail. As Kirstie underwent treatment, her loved ones started a GoFundMe page to cover medical expenses, raising nearly $97,000 of her $100,000 goal through Tuesday, October 11.

Speaking to USA Today on Saturday, Jeff Gibson, the uncle of Kirstie’s husband Colby, said the brave mother “put her body on top of Lilly’s to try and protect her after the attack started,” adding: “Both [dogs] started attacking her as she lay on top of Lilly.” Authorities declared the two young children dead at the scene and Kirstie was rushed to a hospital in critical condition.

According to Jeff, Colby was not home at the time of the attack. In an update on Thursday, October 6, the sheriff’s office wrote that “detectives report that the mother has transitioned to a stable condition at Regional One Health. The two pit bulls responsible for the attack were euthanized this afternoon by Memphis Animal Services. This remains an active and ongoing investigation.”

On Facebook the same day, Jeff revealed that Kirstie had “countless stitches and bite marks all over her body, including her face. Both of her arms and legs are completely bandaged/wrapped. As of now, there seems to be no permanent damage other than “a heart that will never heal.” He called the beleaguered mother “a fucking hero!” and said the attack “went on for over 10 minutes and never stopped trying to save these babies.”

I don’t know if there can be a healing process, but I hope we can ALL find a way to deal with this tragedy,” he said. Kelsey Canfield, a friend of Kirstie’s, told Fox News that the family had owned the dogs, Cheech and Mia, for more than eight years without a problem. “I can promise you those kids were her world, and if there was any glimmer of danger, she would never have had those dogs around her kids,” she told Fox News, “Those kids were everything to them, and they just have a very long journey ahead.”

Kelsey continued: “That attack lasted longer than any of us could have imagined. She was initially confused. She is now awake and she is aware of what happened,” she said. “They were perfect, they were beautiful,” Kelsey added of the two deceased children, saying they “adored each other.”

“It was not only a loss for my sister, but also for me,” Kirstie’s sister told Fox News. “They were my niece and my nephew.” Meanwhile, family friend Stephanie Chipman wrote on Facebook: “To say I am speechless and my heart is and has been breaking ever since I found out is an understatement.”

She added: “Just in absolute shock. Praying a lot that the good Lord will embrace you and your family and help you get through this. Here for you always and I love you so much!” Debbie Harvey, another family friend, described the Bennards on the GoFundMe page as “amazing and sweet,” adding, “They are so loved in this community and we must step up to support them.”