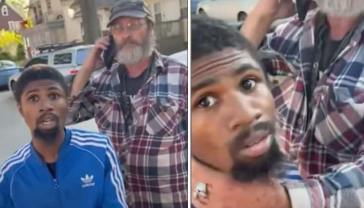 A viral video on the internet has sparked protests in Milwaukee recently. The video shows a white man grabbing a younger black man by the throat, holding his bike and preventing him from escaping, which are arrestable offenses. Deangelo Wright, a good Samaritan, was driving when he saw an elderly white man grabbing the throat of a young black man in Milwaukee, Wisconsin.

He quickly pulled the phone from him and began filming as he tried to intervene and control the situation from escalating further. He tried to give the black man a chance to escape the threat in question by calmly coercing the older man into letting go of his neck. The internet has identified the white man as Robert Allen Walczykowski, 62. The black man has not yet been identified.

Wright told WISN 12 that he was driving when he saw the encounter on the street. He got out of his car to film. “Just looking at him, he looked like he was choking a child. He was sad and very upset,” Wright said. “He was shaking. He didn’t really know what was going on, like he was confused.”

According to Wright, the incident occurred at the intersection of Grant Avenue and 25th Street. “There is no reason why this man should grab this child by the throat. There is no excuse,” Wright said. In the footage, the old man can be heard saying, “This kid here, one of his friends just stole a bike.” from a friend of mine’s yard,” while Wright repeatedly asks him to “let go of his neck.”

The video, first shared on Wright’s Facebook page, has sparked outrage online. It has since been circulated all over the world. social media platforms and garnered thousands of likes.People are speaking out for the young man with special needs and calling on authorities to take action against Walczykowski.

Police and the Milwaukee County District Attorney have not released a statement about the incident and whether or not Walczykowski will face charges. Some locals staged a sit-in in front of his house on Tuesday to protest this apparent racism.