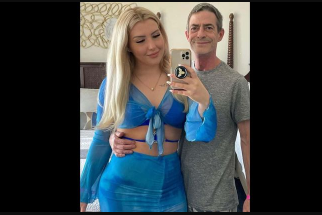 A Michigan couple was trolled for their 33-year age difference. In 2018, Nicole Downs, then 18, found Michael, then 51, on Tinder. The two have been together ever since, and Downs, now 22, decided to post something nice on TikTok about her now 55-year-old boyfriend. She captioned the post, which featured photos of the couple, “Couldn’t imagine my life if we never met.” “We started dating in 2018, we’ve lived together for 3.5 years, we’re best friends.

We’re happy together despite what other people may think,” Downs explained in the video, which has been viewed more than 365,000 times to date. moment. They also created a small fur family by bringing home a cat. She revealed: “We have a cat, Grizzy, together. Happier and closer than ever.” However, TikTok users disagreed with Downs and Michael’s opinion and mocked their odd relationship in the comments section.

Nicole Downs is 22 years old and Michael is 50 years old.

One user wrote: “I legitimately thought it was your grandpa.” “No. Just wrong,” added another. However, many defended the unusual love story. One person wrote: “Don’t let anyone stop you guys.” “I can’t believe the negative comments here. As long as you’re happy, age doesn’t matter. I love you guys,” another user added.This is not the first video that Downs has made as a tribute to her partner. The Gen Z TikToker released another video about her Gen X lover, who was born in the 1960s, in April.

A commenter under that video said: “I don’t think the age difference is the problem, it’s more the fact that you were 18.” Others, however, thought the couple was adorable and that, after four years of dating, they were obviously in love. One person wrote: “After 18 it shouldn’t matter as long as you’re happy.” “No one is the place to tell you who to love after you are an adult,” another user added.

A similar event occurred in 2019 when a different couple, who were attacked by internet trolls due to their 33-year age difference, celebrated their sixth wedding anniversary by buying a house together. When Mark Nichols, 56, from Michigan, started dating Kayleb Alexande, he was called a pedophile because the 23-year-old was 17 at the time.

The charges continued despite the fact that 16 was the minimum age for consent in Ypsilanti, Michigan, where they first met. According to Mirror UK, Mark said at the time: “Online it’s so hard, everything from him being a pedophile to this is sick. People shouldn’t judge age-gap relationships in general, especially if you’re both of legal age.”

Read Also: Who was Raelyn Davis? Wiki, Biography, Age, Family, Cause of Death