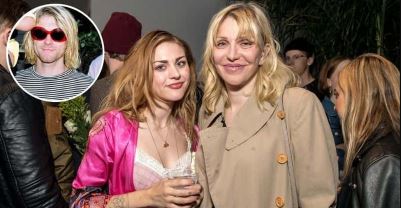 Frances Bean Cobain, the daughter of the late Nirvana singer Kurt Cobain and Courtney Love, has admitted that 10 years ago she “wasn’t sure” she would make it to her 30th birthday, which she celebrated on August 18. Frances, who had a troubled childhood seems to have finally overcome her struggles and is ready to embrace growing up in life.

Frances, 30, shared a poignant post on Instagram, recalling her past trauma, and vowing to herself that if she made it through, she “would no longer try to escape the moments of my life.” She wrote: “30!!!??????? I made it! Honestly, 20-year-old Frances wasn’t sure that was going to happen,” she shared several photos of her and her loved ones. “In that moment, an intrinsic sense of deep self-loathing dictated by insecurity, destructive coping mechanisms, and more trauma than my body or brain knew how to handle informed how I viewed myself and the world; through a lens of resentment at being led into a life that seemingly attracted so much chaos and the kind of grief-laced pain that felt inescapable.”

Frances later described how “an event on a plane that brought me close to death” was the moment when she began to feel gratitude for her life. “I am glad that I was proven wrong and found ways to transform pain into knowledge.” added: “There’s a quote from @jaiyajohn that I hold dear, which goes ‘the softer she got on herself, the softer she got on the world’. It’s a sentiment I try to remember every day. Going into this new decade, I hope to stay soft no matter how harsh the world may feel at times, enjoy the present moment with reverence, shower the people I am lucky enough to love with more appreciation than words could do justice, and have room to keep learning, so that growth never stops. I’m happy to be here and I’m happy you’re here too. ???? ?? ?”

Frances was only one and a half years old when her father, Kurt, committed suicide at 27. The loss of her father at a very young age disheartened Frances and was the bulk of her grief. Frances, who didn’t have a normal childhood, struggled with mental health issues, addictions and years of self-destructive behavior, the star finally got sober in 2016. She took to social media to share “The fact that I’m sober isn’t really public knowledge, purposefully and deliberately. But I think it’s more important to put aside my fear of being judged, misunderstood or pigeonholed as something specific.” Being the child of a celebrity isn’t always that easy, and Frances has definitely learned that the hard way. However, the star has surely come a long way along her journey.

Frances’ new relationship with Tony Hawk’s son Riley comes years after she filed for divorce from her ex-husband Isaiah Silva. The two broke up in 2016 after almost two years of marriage. Frances, 23, cited irreconcilable differences and that he receives nothing from her father’s $450 million estate. However, she is open to paying him spousal support. Silva kept his father’s famous 1959 Martin D-18E guitar, which he claimed he received as a wedding present. Frances denied ever giving him the guitar. Shortly after, the guitar was put up for auction. Frances is reportedly dating Tony Hawk’s son Riley, who appeared on a carousel she shared to announce her return to Instagram earlier this year after taking a mental health hiatus. “I wanted to share some moments that were captured/created last year that brought me great joy. I hope everyone’s 2022 is full of authentic connections, lots of warmth and deep self-discovery ? happy new year ?,” she wrote alongside to that post.