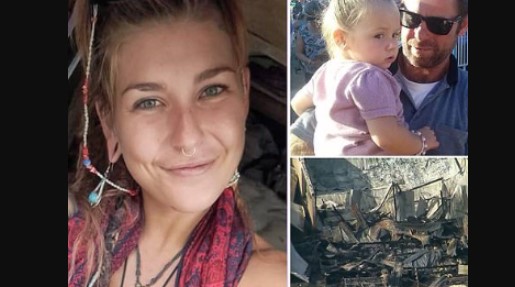 The young woman charged with the gruesome murders of a father and daughter in a Biggenden fire has been identified. Kristen Olsen, 24, was charged with two counts of murder and one count of arson on Friday. Police initially called the deaths a “terrible tragedy” but a homicide investigation was launched nine days later.

Detective Inspector Gary Pettiford would not comment on Olsen’s motive for allegedly killing the Mooneys, but revealed that she was a stranger to her alleged victims. We do not believe that either the deceased or Rebecca, Todd’s fiancée, knew her,” Pettiford said Friday. .

“I can’t comment on many things due to the nature of the investigation. “We still have a lot of work to do and it is all quite delicate.” Police also requested information about the movements of a Holden Barina carriage with a solar panel on the roof in the Biggenden area on December 20.

Olsen posted about the vehicle on her social media accounts, though it was shown painted red last year. The Maryborough woman referred to herself online as a “barefoot gypsy from a small town,” defending the “barefoot bull” movement on Instagram and her OnlyFans account.

Her Facebook account also shows various “check-ins” at Biggenden in previous years. It is understood that she frequently traveled in her carriage, and her most recent activity on her social media shows that she was in Kuranda in the weeks leading up to the fatal fire.

She is a former Biggenden resident and it is understood that she worked at Foodworks in town and at the Commercial Hotel Biggenden. There are no other persons of interest in the case. Investigators had previously requested dash cam images of anyone traveling between Biggenden and Mundubbera between 10 a.m. and 5 p.m. m. and 2 p.m. m. of December 20.

“We’re not looking for anything specific, but we want to get our hands on as much information as possible because that could become vital,” Pettiford said on December 29. Pettiford said last week that the belief that the father and daughter were murdered stemmed from unspecified information from post-mortem examinations.

He declined to comment on what led to Olsen’s arrest and whether Kirra and Todd, a local baker, were determined to be dead before the fire started. She said the cause of the fire is “still being explored” but believes it “ignited” shortly before emergency services were alerted to the fire around 12:20 p.m. m. of December 20.