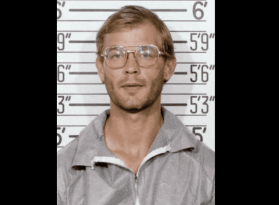 Jeffrey Dahmer, a notorious serial killer who killed 16 men between the ages of 14 and 33, was arrested in 1991. He was convicted and received 16 consecutive life sentences in 1992, but was killed two years later by another prisoner. During his trial, a prosecution psychiatrist said Dahmer would not have killed repeatedly if his attempts to lobotomize a victim and transform her into a zombie-like sexual partner had been successful.

“As for his first choice, his true sexual interest was not in a corpse,” Frederick Fosdal said during cross-examination at Dahmer’s sanity trial. “He was more interested in homosexual relations with a living body.” According to Fosdal, who claimed that Dahmer started the experiments because he had grown tired of the work involved in dismembering and disposing of victims, a sex slave in zombie form “was a solution to his dilemma.”

Dahmer, according to Fosdal, was mentally ill at the time he murdered and dismembered 15 youths in Milwaukee County, but he was not legally insane as he was aware of his misdeeds and was able to avoid killing. . Dahmer was not delusional when he tried to turn four of his victims into sex slaves by drilling holes in their skulls and injecting boiling water or an acid solution into their brains, the psychiatrist said.

He said that he thought that Dahmer, who admitted to carrying out 17 dismemberment murders, would never have committed another murder if one of the experiments had been successful. Fosdal admitted to Gerald Boyle, the defense attorney, that he did not explain the details of how Dahmer intended to feed or care for his “slaves.”

However, according to Fosdal, the disease did not “cause the degree of impairment” necessary for Dahmer to be unable to follow the law. Two managers at a Milwaukee chocolate factory where Dahmer worked from 1985 until shortly before his arrest, when he was fired for absenteeism, testified that they had no previous problems with him.

During cross-examination, Wayne Boening and Melvin Heaney, the employees, stated that they did not know that Dahmer kept a skull in his locker during part of the time he worked there. Forensic psychiatrists concluded that Dahmer had psychopathy or antisocial personality disorder in light of evidence and details related to the murders.