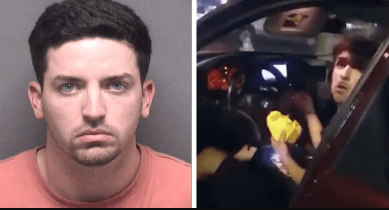 A fired San Antonio police officer who was charged and arrested Tuesday, Oct. 11, for unprovoked shooting of a 17-year-old boy, Eric Cantu, was released early Wednesday on bond, according to the Bexar County Sheriff’s Office. Cantú was seriously injured in a McDonald’s parking lot last week.

James Brennand turned himself in Tuesday night on two counts of aggravated assault by a public servant. He was released from custody at 4:03 a.m. CT after posting $100,000 bond on each charge, the sheriff’s office said. The teen is believed to be in a critical but stable condition. However, the officer’s release has caused a stir on social media, with citizens blaming it for having lost confidence in the justice department.

The ordeal unfolded after Probationary Officer Brennand with seven months’ experience responded to an unrelated disturbance call at the restaurant and saw a car he believed had evaded police the day before. Body camera footage released by authorities shows Officer James confronting Cantu, who appeared to be enjoying a hamburger with a passenger inside the car.

He ordered the teen to get out of the car and the teen, visibly shocked, put the car in reverse and began to back up until James opened fire on him five times. As the teen moved the car forward, James opened fire five more times as the car drove away. The teens were later discovered outside the car a block from the shooting and taken to the hospital, the fellow passenger in the car was uninjured.

His family said he remains on life support and is unresponsive, but his oxygen levels show improvement, CNN reports. The shooting was “wrongful, both administratively and criminally” and was against department policy, Chief William McManus said, adding: “This was a failure for an individual police officer. It had nothing to do with our policies.” .

McManus said department policy prohibits officers from shooting at moving vehicles unless their life or someone else’s life is in immediate danger. The aggravated assault charges could escalate to homicide if the 17-year-old does not survive. Social media users were shocked and disgusted after hearing the news of his release. Attorney Ben Crump took to Twitter to express his abhorrence, writing, “Former San Antonio (TX) police officer James Brennand has been released on bail on aggravated assault charges after shooting 17-year-old Erik Cantu. years”.

“The teen remains on life support and in CRITICAL condition at the hospital, but this cop is out on bail. This is ridiculous,” he commented. Another recalled comment from Chief William McManus about Officer James, he said, “was a ‘failure of an individual police officer, the San Antonio police chief said Tuesday.’ Yet it happens over and over and over again.” While another chimed in, “This is precisely why so many citizens don’t trust their local law enforcement agencies.

#AggravatedAssault should not be bailable at all.” Another user added a Gif showing a man slamming his hand on the table in frustration. One user simply wrote that the teen didn’t deserve this and that James is a threat to society. “# ErikCantú did not deserve what happened to him, James Brennand is a threat to society,” he wrote. Two users continue to chat about how low the bonus was, “sorry low bonus on that…”. Added another, “Yeah very low, should have been half a million each.