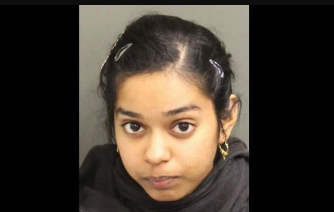 Fatiha Marzan, 21, admitted to planning and killing her younger sister as punishment for flirting and texting her long-distance boyfriend, police said. Fatiha was arrested last week and charged with one count of first-degree murder with a weapon, a capital offense, for repeatedly stabbing 20-year-old Sayma Marzan in the heart. The murder, according to the police, took place on September 26 at 4:30 a.m.

In the bedroom they shared in her parents’ Orlando home, Law & Crime reported. According to an Orange County Sheriff’s Office arrest affidavit, deputies with the Sector II Patrol Unit responded to a 911 call about “an aggravated assault with a knife” at a home in the 500 block of Southern Charm Drive on September 26 around 7:32 p.m. . The caller, who identified herself as Fatiha, reportedly informed the responding officer that she had “stabbed her sister” around 4:30 a.m. that morning and that she “doesn’t think she be alive.”

Deputies and members of the Orange County Fire Rescue Medic found Sayma dead upon arrival at her home. After doctors pronounced her dead around 7:49 p.m. m., Fatiha was arrested and taken to the sheriff’s office for questioning.

Fatiha said that Sayma never respected her feelings.”  Fatiha bought a “dagger-style knife set” on Amazon about two weeks before Sayma’s death, according to investigators, and hid the weapons in her closet and backpack. She is also accused of planning the attack at night when her family would have finished praying and she would have fallen sound asleep.

According to police, she allegedly retrieved the hidden knife and stabbed her sister three or four times specifically in her heart in her shared room. According to the affidavit, “Fatiha said that Sayma was asleep in the bed they shared when she started stabbing her in the heart. According to Fatiha, Sayma woke up and said ‘what the hell?’ and the word ‘help.'” Fatiha Marzan is now being held in the Orange County Jail without bond.