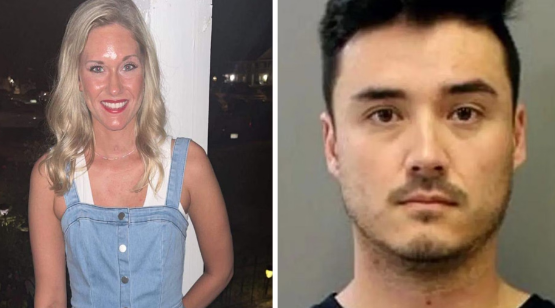 Brian Mann, 34, allegedly tried to kill his estranged wife, Hannah Pettey, by poisoning her. Brian works as a chiropractor in Alabama and the couple was supposedly divorcing. According to multiple court documents, Mann forced his wife Hannah to “unintentionally ingest lead particles.”

The Alabama chiropractor was charged with the attempted murder of his wife. Brian Mann reportedly wanted to slowly poison Hannah to her death. It is alleged that he gave her pills claiming they were good for her health, however they allegedly contained traces of lead. The pills were given to Hannah in the summer of 2021 and he continued to take them until the end of the year.

Hannah Pettey, 24, was reported to have spent two months at the University of Alabama Hospital in Birmingham while she recovered from suspected lead poisoning. She filed for divorce from her just days after she was released from the hospital.

Supposedly, Brian gave his wife pills and told her they would “boost her immune system” from her. The same has been confirmed by Pettey’s lawyer as well. The chiropractor was granted a release on a $500,000 bond, so he could pay child support and alimony for Hannah and her children.

He was then asked to hand over his passport. After failing to do the same, Brian Mann was arrested again. The New York Post reported that Brian’s passport has yet to be released to authorities. After Brian’s arrest in September, his father filed an affidavit saying: Judge Charles Elliott, who released Brian Mann, added that he was at a “crossroads” in the case.

Elliott mentioned that the longer Brian stayed in prison, the more Hannah and her children would not get financial support from him. According to court documents, the Hartselle resident is currently $8,000 behind on his expenses. It has also been confirmed that the couple’s divorce proceedings are on hold.

According to a complaint filed by Pettey: The attorneys representing Brian requested a reduction in the value of the bond from $500,000 to $250,000, however, it was denied. His legal representatives also claimed that his passport was marked and that Brian Mann could not use it even if he still had it.

Brian and Hannah have been married for around five years and have two children together.Despite the release,  several restrictions have been placed on Brian. He is not allowed to leave his residence before 8 am or after 6 pm local time.

He also has to spend time in jail from 4 pm on Fridays to 8 am on Mondays. Aside from these restrictions, Brian Mann is required to have an ankle monitor and is prohibited from contacting Hannah or consuming alcohol. Mann also has to go through frequent drug checks.

Investigators allegedly discovered that Mann had five life insurance policies that would become payable on the death of his wife. He would also reap collective benefits worth $1.3 million. Supposedly, Brian had applied for two more policies worth $1.5 million, which would also be payable on Hannah’s death, however, they were rejected. Mann was being held in the Morgan County Jail.

Judge Elliott was unwilling to release Brian Mann, but noted that his release was necessary for the financial situation of his wife and his children. In addition to attempted murder, Brian Mann also faces negligence charges in a separate lawsuit. In November 2020, it was alleged that he injured a patient causing her extreme back pain and preventing her from walking. The case is currently ongoing, and authorities will share more details soon.