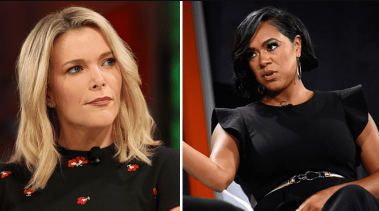 Tiffany Cross was fired from MSNBC on November 4, and Megyn Kelly praised the network’s move, calling Cross “the most racist person on all of television.” On her SiriusXM podcast ‘The Megyn Kelly Show’, which aired on November 4, Kelly discussed Cross’s departure from MSNBC with her guest, conservative radio star Dana Loesch, referring to the move. as “excellent news”. A cheerful Kelly said:

“Tiffany Cross, the most racist person on all of television, and MSNBC in particular, has just been fired. Poor Tiffany.” Cross is leaving MSNBC, after frequently making offensive statements on air after being warned by network officials as reported by The NY Post. After two years, MSNBC decided not to extend Cross’s contract, ending her employment with the left-wing network.

As a result, the source claims that Cross’s show on Saturday mornings from 10am to noon has been cancelled. She will be several alternate hosts for the new show. The relationship between the host and MSNBC was reportedly “fraying,” according to sources cited by Variety, which first reported on Cross’s departure. Cross’s behavior was reportedly “not up to the standards of MSNBC or NBC News”, as she was frequently involved in arguments with stars from rival networks.

According to the New York Post, after citing the Variety article, Kelly talked about a couple of “big hits” for Cross while working at MSNBC, like the time he claimed that the “white owners” and “white coaches” of the NFL were going to blame for Tua Tagovailoa’s terrifying head injury on the field last month. The full episode of ‘The Megyn Kelly Show’ can be found here.

While Mike McDaniel, the Dolphins head coach who drew criticism for allowing the quarterback to play despite a previous head injury, is multiracial. Tagovailoa was born in Hawaii, his parents are from the island of Samoa in the South Pacific and he is of mixed race. When Cross made her comments about Tagovailoa, Kelly initially referred to her as “the most racist person on TV” and later called her a “fool” on another episode of her show.

Kelly also testified that Cross had referred to Republican politicians as “white supremacists” after, among other cases, a Wisconsin jury exonerated Kenosha gunman Kyle Rittenhouse. Although the jury found that the 18-year-old Rittenhouse shot three people in self-defense last year, killing two of them, and that all three victims were white like Rittenhouse, Cross referred to Rittenhouse as “this little murderous white supremacist.” . ”

“I could give you 10 more that are way worse than any of these, that’s what we got from a simple google search. So joy, oh joy, Tiffany Cross is gone,” Kelly said. “I had to do a lot of thinking and remember who she was,” Loesch said. “No one knows,” Kelly replied. “Hats off to MSNBC and NBC for doing the right thing, because like I said, she was the most racist person on television,” Kelly said later in the segment.

According to the New York Post, Cross’s other controversial statements include referring to Alyssa Farah Griffin, the new co-host of ‘The View,’ who once served as Trump’s White House communications director, as a “jacket loyal to Trump,” among others. She urged progressives to “pick up a gun and get involved” in the “war” for the nation’s survival while discussing Trump’s alleged election intervention.