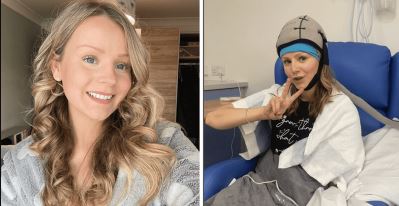 An oncology nurse has told her story after being diagnosed with the disease. Sophie Jackson, an NHS worker, said a lump in her right breast was initially described as “probably nothing” but later turned out to be stage 2 invasive ductal carcinoma, an aggressive type of breast cancer.

The 26-year-old told the Daily Mail UK: “I cried my eyes out and asked first if I was going to die and second if I was going to lose all my hair. Apart from the lump I had no other symptoms at all. He felt completely random and the diagnosis came as a shock. I felt disappointed. Doctors initially thought it was nothing based solely on age.”

“I am frustrated by the guidance that exists with ‘stereotypical’ lumps to look for, such as being hard or immovable, as mine met all the criteria to be what they classified as ‘nothing.’ If he had left it for four weeks as the GP suggested, it is possible that he would have spread in that time and would have been seeing an incurable diagnosis,” he stated in his interview with the Daily Mail UK.

Jackson, who received her training at Bournemouth University and later joined University Hospitals Dorset as a senior nurse in the oncology unit, first encountered the lump in September 2021. She soon went to see a doctor, who reportedly found her. he advised that he “wait four weeks”. Let’s see if the feeling goes away. But since she is a cancer care provider herself, she demanded a referral to a breast clinic.

Jackson then went to see a specialist at Poole Hospital, where she was referred for an ultrasound and four biopsies that finally revealed her to be cancer in November last year. She explained: “When I was diagnosed, it was extremely overwhelming; patient information is usually trickle-fed as it is too much to take on at once. I didn’t have that luxury and instead instantly realized I was facing surgery, chemotherapy, losing my hair and becoming infertile at such a young age.” She spoke about her experience and mentioned that her career as a nurse helped her cope. “I think my job helped me in a way, as I didn’t have the expected anxieties about chemotherapy. I knew what was going to happen, I knew the drugs, and I knew and trusted the people who were giving them to me, which saved me a lot of worry,” she noted.

The nurse revealed that she has since received a lumpectomy and multiple cycles of chemotherapy and radiation therapy. She said: “It felt really strange to be given chemotherapy drugs that I had given to other patients before, like an out-of-body experience. I was also in disbelief seeing my name on the chemo bag and having my data checked when it was usually me on the other side. It caused me anguish because the discomfort meant that I couldn’t work for a while, which made me anxious, especially seeing that my colleagues were still working and taking care of me.
The New York Post, citing the Jam Press, reported that Jackson not only lost his hair, eyelashes and eyebrows, but also underwent “fertility preservation and will spend the next 10 years enduring injections, tablets and IV infusions every year.” six months as part of the maintenance hormone. therapy.”

While she was receiving treatment, Jackson had taken a leave of absence from her nursing duties. However, in July she went back to work, which she described as a different feeling. She said: “I feel different about the job, I have a lot more empathy towards patients now and I feel like I have a unique understanding. However, I also have problems, as I am also a cancer patient and will continue to be for a long time.”

“The typical understaffed, overworked NHS with no breaks leaves me drained and exhausted. Sometimes it’s hard to process caring for patients and supporting cancer patients when it means running me down when really I probably need the support myself,” she stated.

Although Jackson is cancer-free at the moment, she has been warned that she will likely return within the next two years. Raising awareness of the disease, she added: “I would love to spread awareness that cancer can strike you at a young age, even with no family history, no genetics, no risk factors other than taking the contraceptive pill. Early detection has saved my life so it is very important to check monthly and push to get things checked. You’re never wasting anyone’s time.”

Additionally, Jackson has a personal blog called “The Cancer Nurse Who Has Cancer,” where she posts about her cancer journey. On her behalf, she has also started a fundraiser to “show support for Sophie and her incredible journey and help important research to eradicate cancer for our and future generations.”

The fundraiser’s message reads: “CANCER PLAYS DIRTY, BUT SO DO WE! Cancer is happening right now, that’s why she participated in Race for Life to raise money and save lives. 1 in 2 people will be diagnosed with cancer in their lifetime. Every pound you donate makes a difference to the innovative work of Cancer Research UK.”