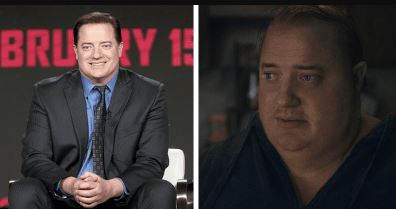 Actors often have the herculean task of transforming their bodies to fit the roles they seek to portray. In one such case, ‘Mummy’ star Brendan Fraser will now be seen in the upcoming film, ‘The Whale’, for which he had to ‘carry’ up to 300 extra pounds thanks to his prosthetic suit, a task he describes as “uncomfortable”. In particular, several fans expressed their concern, adding that the actor looked unrecognizable due to his weight gain.

The 53-year-old actor has now spoken about the difficulties of carrying the extra weight and the challenges of filming with it. He plays the role of a 600-pound man named Charlie in Darren Aronofsky’s psychological drama, an adaptation of Samuel D Hunter’s play of the same name. The film also stars Sadie Sink as her teenage daughter.

Speaking with Vanity Fair, Fraser revealed that it took a lot of effort to film the scenes as he was always carrying between 50 and 300 pounds due to the prosthetic suit he had to wear. The suit’s elaborate torso piece made the whole experience “cumbersome” and “not exactly comfortable”. In fact, the actor recalled the horrors of donning the artificially fattening suit, saying, “The torso part [of the suit] was almost like a straitjacket.”

He also added that a lot of effort was put into ensuring the added weight looked as natural as possible. This involved a ton of makeup and visual effects, “With sleeves continuing, hand-touched up, to look identical to human skin, right down to hand-pierced hair.” The test required him to stay in the makeup chair for more than five to six hours. The film’s lead actor, Fraser, plays the role of Charlie, a man looking to reconnect with his teenage daughter, played by Sadie Sink. The character weighs a total of 600 pounds in the film, the result of binge eating induced by his guilt for leaving his family for a gay lover who later dies.

However, the veteran immersed himself in the role, doing his best to perfect his performance. For example, he revealed that he consulted the Obesity Action Coalition to get a better idea of ??what it was like for people who had bariatric surgeries and had a high body weight. On this, he stated, “I quickly learned that it takes an incredibly strong person inside that body to be that person,” adding, “I found that appropriate, poetic, and practical all at once.” ‘The Whale’ is scheduled to premiere at the 79th Venice International Film Festival on September 4, 2022. It will be released in the United States on December 9, 2022.