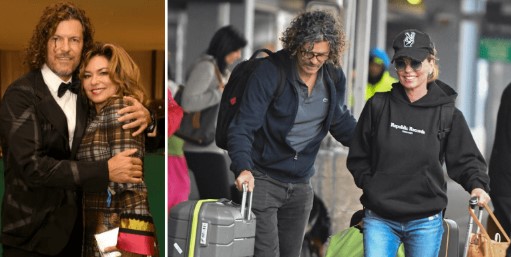 Shania Twain was seen at John F Kennedy International Airport in New York City with her husband of 12 years, Frédéric Thiébaud, on their wedding anniversary on Sunday, January 1. The loving couple have been married since 2011, following the singer’s divorce from her ex. husband Robert John Lange.

The circumstances of the separation and eventual romance were quite peculiar, with Robert cheating on Shania with Frédéric’s ex-wife Marie-Anne first. Shania began her romance with Frédéric soon after. Lange and Shania were married between 1993 and 2011 and have a son, Eja, born in 2001.

Born on August 1, 1970, Frédéric is a Nestlé business executive from Switzerland. He is five years younger than his wife, the singer, and the couple live mainly in the Swiss city of Corseaux, which overlooks Lake Geneva. They also reportedly have a residency outside of Las Vegas because Shania often performs in the city.

Shania and Frédéric first met in the 1990s and were both married to other people at the time. She was with producer Robert “Mutt” Lange, while the Swiss businessman was married to Marie-Anne Thiébaud. Mutt hired Marie-Anne to be the family assistant and she quickly became one of Shania’s dear friends.

Eventually they became so close that the two couples would take vacations and spend the holidays together. In 2008, however, Shania and Frédéric’s worlds were shattered when Mutt and Marie-Anne had an affair. As a result, Shania was separated from her husband of 14 years and turned to Frédéric for support, as reported by Good Housekeeping.

“The person who comforted me was Fred because he’s been through the exact same thing,” she told Oprah Winfrey. “Fred was safe. So it was really a beautiful and perfect friendship.” Their mutual heartbreak culminated in an unexpected love story. Shania and Frédéric fell in love and were seen several times on vacation together with her son Ejia and her daughter Johanna.

They took their relationship to the next level in December 2010, when the duo announced that they were engaged. Shania opened up to her fans about what had happened on her website. “In the last two and a half years of adjusting to life after separation and divorce, I needed to lean on others more often than I was used to,” she wrote. Frédéric was one of those who supported the star.

“I’m excited to share some personal news with you, I’m in love!” she sprouted. “Frederic Nicolas Thiebaud has been a true gift to me as a compassionate and understanding friend and, over time, incredible love has blossomed out of this precious friendship. Fred and I are happy to announce our ENGAGEMENT!”

The lovers finally took holy vows on New Year’s Day 2011. “They were married at sunset in Rincón, Puerto Rico, in front of 40 of their closest friends and family,” a representative told People magazine. Shania revealed to the magazine how she fell in love with Frédéric after seeing him experience the same vulnerable situation that she found herself in.

“I got to watch Fred go through the same thing as me and admired how he handled it,” she told the outlet. . “That’s where I fell in love with him because he was so exemplary in every way.” Now, more than a decade after sharing their mutual pain, the couple is happier than ever. “I’m so grateful that I found the faith and courage to love again, because the last thing you want to do when you’re broken is love again,” Shania told People in February 2020.

“When you have a great loss, you lose faith. , you get very discouraged. I’m sure a lot of people say, ‘I’ll never love again. I don’t want to fall in love again.’ Songs have been written about it. I’m so glad that’s changed for me, and that’s what this one is about. relationship,” he added.