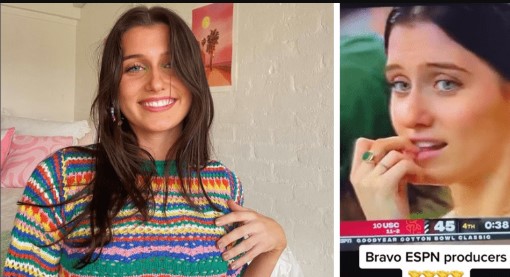 In the closing moments of Tulane’s comeback victory over USC in the Cotton Bowl on Monday, January 3, a Green Wave fan named Ellie Fazio captured the nation’s attention. The Green Wave trailed 39-45 with 38 seconds remaining when ESPN cameras caught a nervous Tulane fan biting her nails in Arlington, Texas.

Fazio, a Tulane student, became a Twitter sensation following Green Wave’s incredible 46-45 comeback victory over the Trojans, giving them their first bowl win since the 2019 season. After noticing it was trending On social media, Fazio shared a TikTok duet with @jackmacbarstool, a user who was looking for her.

She filmed a clip of herself smiling at the camera holding her phone in front of the mirror, and on the other side of her was a clip that Jack Mac captured as he watched the angsty game. In her caption, Fazio added the hashtag “tulanegirl” and said, “That game was really exciting.”

In the video, Mac is heard saying, “One of the best decisions in college sports history was made today by an ESPN producer putting this guy on my TV screen. Oh my gosh thank you look those eyes”. The comments section then saw a spike in activity from those who agreed with Mac’s statement.

One person commented: “These last games, the cameramen have understood the task.” Another person struck by Fazio’s beauty wrote: “Lsu will lose a lot of guys if Tulane puts this kind of talent in New Orleans.” Fazio also received praise for her beauty on her Twitter. One individual wrote: ”

This girl is beautiful. I rewound the game to find her again lol.” Another tweet read: “All the college football bros ? are falling in love with ‘Tulane Girl’. ??” Someone else wrote: “God she is beautiful! Such beautiful eyes!” Another compared Fazio to a Disney princess, writing: “This is live action Rapunzel when she went to college in America ?.”