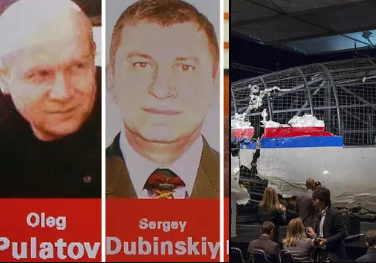 A Dutch court has sentenced three men to life imprisonment for the downing of Malaysia Airlines flight MH17 over Ukraine in 2014, in the early stages of a war that eight years later would put the world on edge. Russians Igor Girkin and Sergei Dubinsky and Ukrainian Leonid Kharchenko were found guilty in absentia of killing all 298 people on board and shooting down the Boeing 777 with a Russian-supplied missile.

A fourth man was acquitted. Ukrainian President Volodymyr Zelensky hailed the “important” court ruling. Family members of the MH17 victims blinked back tears as the verdicts were read out to a room full of families whhad traveled from around the world for the end of the two-and-a-half-year trial.

“The court finds the proven charges so serious that it holds that only the highest possible prison sentence would be appropriate,” Chief Judge Hendrik Steenhuis said. “Imposing these sentences cannot take away the pain and suffering, but there is hope that today it has become clear who is to blame.”

But none of the suspects were in the high-security court outside Schiphol airport, where the doomed plane took off, after Russia refused to extradite them.The trial marks the end of a long search for justice for the victims of the disaster, who came from 10 countries, including 196 Dutch, 43 Malaysian and 38 Australian.

“Justice has spoken. We wanted justice to be done and that happened, in a very balanced verdict,” Piet Ploeg, president of the MH17 foundation, who lost his brother, sister-in-law and nephew, told the AFP news agency. . “Russia’s role has been very clearly confirmed by the court.”

Flight MH17 from Amsterdam to Kuala Lumpur was cruising at 33,000 feet over war-torn eastern Ukraine when a BUK missile exploded near the cockpit on July 17, 2014, wrecking the plane.

The judges found that Girkin, Dubinsky and Kharchenko could be held responsible for transporting the missile from a military base in Russia and deploying it to the launch site, even if they did not pull the trigger.

There was insufficient evidence to prove the involvement of Oleg Pulatov, the only suspect who had legal representation during the trial, they said.

Read Also:  Who was Ebenezer Haile? Wiki, Biography, Age, Family, Cause of Death