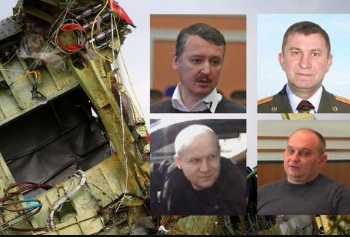 A Dutch court on Thursday found two Russians and a separatist Ukrainian guilty of mass murder for their involvement in the downing of Malaysia Airlines Flight 17 over eastern Ukraine in 2014. Igor Girkin, a former colonel of Russia’s Federal Security Service (FSB), and Sergey Dubinskiy, who worked for Russia’s GRU military intelligence agency, were convicted along with Ukrainian separatist Leonid Kharchenko, who is believed to have led a combat unit in Donetsk in July 2014.

The three were sentenced to life in prison and ordered to pay the victims more than 16 million euros, but as the convictions were handed down in absentia, none of them are likely to serve their sentences. A fourth suspect, Russian national Oleg Pulatov, a former soldier of the Russian special forces Spetsnaz-GRU, was acquitted. “Causing the crash of Flight .

MH17 and the murders of all persons on board is such a serious accusation, the consequences are so devastating, and the attitude of the accused is so reprehensible, that a limited period of imprisonment will not suffice,” the court said following the verdict.Flight MH17 was on its way from Amsterdam to Kuala Lumpur on July 17, 2014, when it was shot out of the sky over territory held by pro-Russian rebels in eastern Ukraine.

All 298 people on board were killed, including 15 crew members and 283 passengers from 17 countries. The downing of the jet happened in the early phase of the conflict between pro-Russia separatists and Ukrainian forces, a precursor to Moscow’s full invasion of Ukraine earlier this year. Thursday’s verdict, which follows a two-year trial at the highly secured Schiphol Judicial Complex in Badhoevedorp, marks the first time that independent judgment has been passed on the incident, and may provide some small amount of justice for the families of the victims.

The case has become more significant in light of Russia’s all-out invasion of Ukraine, which is nearly in its ninth month. One legal expert told Reuters that the ruling could impact other cases involving Russia, including one at the United Nation’s top court, the International Court of Justice. The verdict comes weeks after Moscow sought to illegally annex four Ukrainian regions, including the area where the court said the missile that brought down MH17 was fired from eight years earlier.

It also comes two days after a missile landed in Poland, raising fears that Russia’s assault on Ukraine could spill over into neighboring countries.The court found that Flight MH17 was hit by a Russian Buk missile launched from farmland outside a village in eastern Ukraine that was held at the time by pro-Russian rebels who were under the control of Moscow, and that the missile system had been moved back to Russia after the strike.

The three convicted men all played key roles in and transporting the Buk system and its crew into Ukraine, the court ruled, though it found there was insufficient evidence to determine who fired the missile. Presiding judge Hendrik Steenhuis said the court found that the firing of the missile at MH17 was a premeditated act intended to bring down a plane – and while the crew likely believed they were firing at a military aircraft, it would have been “crystal clear” to them that no one on board any targeted aircraft would survive.

“A Buk weapon system is designed to shoot down aircraft and cannot simply be used at random. Such deployment requires preparation, including determination of and transport to a launch site. Firing the missile needs to be very deliberate and carefully considered in accordance with a technical procedure and requires a highly trained crew. The likelihood of persons on board an aircraft surviving an attack by a Buk missile is nil.

Anybody who deploys a specialized, costly weapon such as a Buk TELAR will be aware of this,” the court said in a statement. The court also ruled that since the defendants were not official parties to the conflict and thus did not have combat immunity, they were not allowed to shoot down any aircraft, military or civilian. Moscow has repeatedly denied any responsibility for the attack, and Russian officials and state media have put out a range of often contradictory explanations for the tragedy.

But on Thursday, Steenhuis cited a range of evidence for the court’s verdict and ruled out any alternative explanations for the incident. The evidence reviewed by the court included fragments of a Buk missile found embedded in the aircraft and the bodies of some victims, intercepted telephone calls and witness statements, and videos and images of the scene and of a Buk system being moved into eastern Ukraine from Russia and then back again.