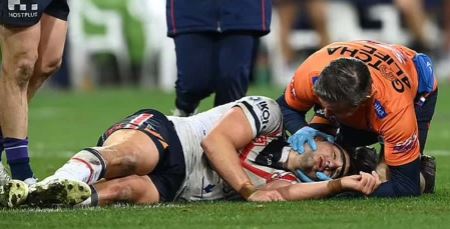 Sydney Roosters lock Victor Radley suffered a horrific head injury during the team’s 18-14 victory against the Melbourne Storm. Radley was knocked unconscious while trying to bring down Melbourne prop Jesse Bromwich with just over eight minutes to go in the game at AAMI Park on Friday, August 26, but he put his head in the wrong place. As the Roosters star landed on Bromwich’s hip, Radley looked dead as he landed on the ground.

The 24-year-old appeared to be having seizures in disturbing scenes as the Roosters’ medical team rushed to him. After he was carried off the pitch on a stretcher by medical personnel, an eerie silence spread across AAMI Park as Fox League cameras panned away from the incident.

At the time the Roosters forward left the field, the NRL Physio account tweeted: “Victor Radley showed signs of seizures/fits after suffering a concussion there. Despite the graphic nature of the incident, the presence of immediate seizures is not associated with adverse outcomes (via scans/recovery time) or risk of future seizures.”

Fox League reporter Lara Pitt saw that Radley appeared to be recovering quickly and that he was chatting with medical professionals in the medical tent as they examined him. After the final whistle of the game, Radley was seen on the field chatting and laughing with his teammates, and conferring with Roosters coach Trent Robinson in the team’s locker room.

However, the accident involving Radley, who took a heavy hit against Newcastle in the season opener, may cause anxiety. In an effort to get him back in time for the playoffs, the Roosters are expected to rest him for the season finale against the Rabbitohs.

Many viewers were upset about Radley’s injury and, in particular, his brutal nature, including Fox League announcer Dan Ginnane. “Radley is in trouble here. They’re going to have to stop playing here. Oh dear, these are ugly pictures. These are disturbing scenes,” he said.

Others agreed, noting that the cameras could have quickly moved away from the incident. One user tweeted: “That was one of the scariest things I’ve ever seen on a football pitch. Thoughts with Victor Radley and his family.” Another said: “Watching Victor Radley convulse after that headshot was hard to watch. The commentators have gone absolutely silent and ignored the obvious. I think the game needs to be better in situations like this, it’s going to come back to happen, let’s talk about it # NRL broadcaster Quentin Hull tweeted: “It’s been a long time since I’ve seen something on a football pitch that made me feel like a thief. My best thoughts to Victor Radley #NRLStormRoosters”