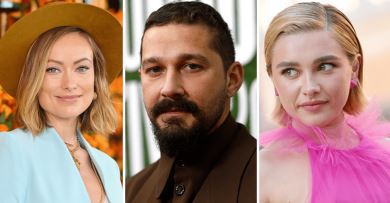 The video reportedly dates back to 2020 and was leaked on Friday, August 25. In the clip, Olivia Wilde also hints at the disagreement between Shia LaBeouf and the film’s leading lady, Florence Pugh, suggesting “this could be a wake-up call for Miss Flo. The leaked video of Olivia Wilde comes after the filmmaker told Variety that Shia was fired from the project and replaced by Harry Styles.The ‘Transformers’ star soon clapped back with screenshots of the text messages Wilde sent in an email to Variety.

The new controversy comes amid Florence Pugh reportedly limiting her press duties by hinting at major behind-the-scenes drama. Speaking of the leaked video of Olivia Wilde, in the selfie clip, the ‘Booksmart’ director while messaging Shia says, “I wanted to reach out because I feel like I’m not ready to give this up yet.” and added: “I’m heartbroken too and I want to work this out.”

The 38-year-old then asks Shia to make amends with Florence Pugh, as the two apparently didn’t get along. “You know, I think this might be a little wake-up call for Miss Flo, and I want to know if you’re willing to try it with me, with us.” She adds: “If she really commits, if she really puts her mind and her heart on this and if you guys can make amends and I respect her point of view, I respect hers, but if you can do it, what? What do they do? do you believe There is hope? Will you let me know?” reports Page Six.

While there have been rumors that Florence Pugh has issues with Olivia Wilde’s relationship with Harry Styles, Wilde praised the actress in an interview with Variety, calling her “extraordinary,” adding that she was “in awe” of her. talent. Florence Pugh has been mostly silent about all the drama that unfolds before her movie hits theaters.
According to The Wrap, Pugh will only be doing one main press piece to promote Olivia Wilde’s “Don’t Worry Darling,” suggesting that she may be stepping away from all the chaos. Speaking about the same, Pugh’s rep told the publication, “Florence has been in Budapest filming Dune 2 and before that filming [Christopher Nolan’s] Oppenheimer.” The representative added, “She will be in Venice for the premiere after a night shoot in Budapest.” Florence Pugh may just be attending the red carpet and press conference for ‘Don’t Worry Darling’ at the Venice Film Festival.