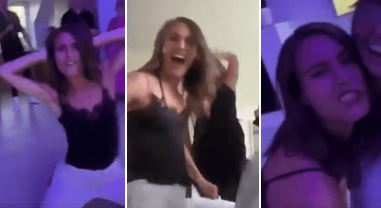 Prime Minister Sanna Marin vehemently denied using drugs after she landed in hot water over a video that showed her having a wild party with celebrity friends.

The 36-year-old glamorous politician let her hair down as she partied with the star-studded group in what appeared to be a private apartment. She was seen dancing and cavorting with the group in a video shot on a cell phone. The raucous scenes sparked outrage and prompted Finnish MP Mikko Kärnä, from Marin’s coalition partner Centre Party, to urge her to take a voluntary drug test. However, the PM denied using drugs and said she had “nothing to conceal or hide.”

“I haven’t used any drugs, so it’s not a problem to take a drug test, but I also think it’s quite special that something like this is required,” Marin told reporters at a news conference at the Rissala airport. Kuopio on Thursday, August 8. 18. “I didn’t see any evidence that anything was used anywhere,” she added. Earlier in the day, she defended herself by saying, “I’ve danced, I’ve sung, I’ve celebrated, I’ve done legal things,” as she insisted that she hadn’t been drinking much. Marin also lashed out at the person who leaked the videos, which she said were from a couple of weeks ago. “I was trusting that since the videos are private and were posted at a private event, they wouldn’t be posted,” Marin said, adding, “I feel bad that they were posted.”

Marin was asked if the viral clip warranted a police investigation, to which she replied that she still didn’t know if anything illegal had happened and “it would hardly be a police matter.” Furthermore, she revealed that the night had been spent in two separate apartments with about twenty people. Apparently, the group also visited two bars. That said, the leaked video was taken from a private account’s Instagram stories and appears to show the Finnish prime minister and her group of her famous friends partying with no inhibitions. Public figures seen in the video include Finnish singer Alma and her sister Anna, rapper Petri Nygard, TV host Tinni Wikstrom, photographer and influencer Janita Autio, radio host Karoliina Tuominen, as well as some parliamentarians from their own social democratic party.

The video has drawn criticism in Finland from those who considered Marin’s conduct inappropriate for a world leader, especially as Finland finds itself in a national emergency after the country ended its historic neutrality to join NATO and came into conflict with a belligerent Russia.

Earlier this week, German tabloid Bild called Marin “the coolest politician in the world” for her laid-back style of leadership. The newspaper described her as “relaxed, modern and confident” and noted that she “can have fun too”. Bild wrote that Marin belongs to the “cool generation” that Vladimir Putin does not appreciate. And while there is plenty of criticism of the leaked video, there are also those who believe her notoriety would give her a potential popularity boost for behaving in a way many young people would identify with.

Read Also: Who was Kosoul Chanthakoummane? Wiki, Biography, Age, Family, Cause of Death