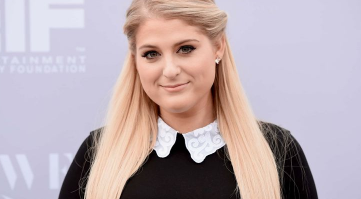 Meghan Trainor has recently opened up about the traumatic week following the birth of her son, Riley. She spoke in detail about the medical complications that befell her son immediately after her birth and the ordeal that she and her husband had to go through. The ‘All About That Bass’ singer welcomed a baby in February 2021 with her husband, actor Daryl Sabara, whom she has been married to since 2018.

They were introduced by ‘The Fifth Wave’ actress, Chloë Grace Moretz.Trainor detailed the difficult times following the birth of her child in a recent interview with People. She talked about how her son couldn’t stay awake long enough to be fed and how the doctors never had an explanation for her or her husband as to why.

It was unclear when her condition would improve, or if she ever will. She had also previously spoken about how her son was in the NICU for an extended time due to his trouble staying awake long enough to feed, according to a FOX News report. “It was really frustrating not having an answer,” the singer said. “Not having answers as to why my son didn’t wake up for a week was very frustrating.”

The 28-year-old singer also ran into trouble with her nurses, who were quick to blame her son’s condition on her. All of her nurses told her that her son’s condition was largely due to her taking antidepressants. “They said, ‘Sometimes it happens,’ and then some nurses said, ‘Well, it’s because you’re taking antidepressants,'” Trainor said. “And I’m like, ‘Yeah, but others have told me that’s not it.'”

The singer has let it be known that the harsh reality of the situation was lost on her until it happened and she started seeing her therapist for it. She has said that she is continually plagued by nightmares about being back in the delivery bed and having a C-section. It would seem that the whole experience has left a sour taste in the mouths of both Trainor and her husband Sabara, and Trainor acknowledged that she harbored fears of being pregnant again for months.

“It’s scary to go into another pregnancy and say, ‘Well, I hope that doesn’t happen again.’ Do I have to change my whole life? I don’t know,” she explained. “So it’s infuriating.” However, she is happy to let people know that despite the turbulent experience regarding her first pregnancy, Trainor and Sabara are now trying to have another child.

Read Also: Who was Joyce Sims? Wiki, Biography, Age, Family, Cause of Death