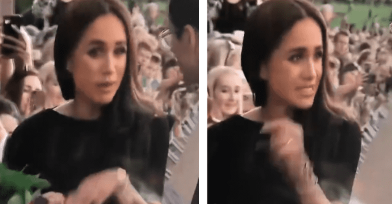 Princes William and Harry made an appearance with their wives Kate Middleton and Meghan Markle outside Windsor Castle on Saturday, September 10. The internet is torn by videos showing Meghan, the Duchess of Sussex, chatting with an assistant. The Duchess of Sussex, the Prince and Princess of Wales and her husband, Prince Harry, were addressing mourners outside Windsor Castle when the incident occurred.

The duchess can be seen turning quickly and appearing to have a brief look of irritation on her face, according to multiple social media users. Before finally smiling, nodding and turning to face the audience, Meghan muttered a few things to the attendee as she pointed in a direction. While some said that she “was rude to poor employees again,” others who defended her said, “Why is a girl mean if she defends herself?”

One Twitter user wrote: “What was this exchange?” “Meghan Markle being rude to poor employees again even during this sad time ? When will she learn that it is unacceptable to treat the people around her like trash? The look of contempt on her face when she fires the poor guy says it all” , added another. hurry? Where’s the fire? Did she discover a camera that was NOT focused on her? Another user commented.

On social networks, however, some users defended the duchess. One person wrote: “Why is a girl mean if she stands up for herself? There are three sides to every story and everyone should be concerned about building a family in peace and stop criticizing everything.” “I’m not a fan of Megan, I’d be glad if she never came back to the UK, BUT GIVE HER A BREAK. She did the tour yesterday. She must have had some courage to do it, not knowing how people would react, but she did, supporting Harry and no one knows what was said or intended between the brothers,” another person commented.

Later, a freelance journalist joined in and offered to shed some light on the matter at hand by revealing that Meghan had refused to give her assistant her bouquet of flowers. journalist R.S Locke, known as the Royal Suitor on Twitter, claimed that Meghan told her assistant: “I told them I’d put them there, so that’s fine. Thanks. However, I appreciate it. “How nice of Meghan to put flowers on the door for some of the people in the crowd,” Locke added.

Meanwhile, it wasn’t the only video to spark debate as the Sussexes and Wales spoke to the crowd after Queen Elizabeth II’s death. Social media was also divided over the video of Meghan apparently being snubbed by a mourner. A woman was seen looking down as the Duchess walked by in a video shared on Twitter. The video sparked a heated discussion on social media, with Twitter users having differing opinions on the exchange.