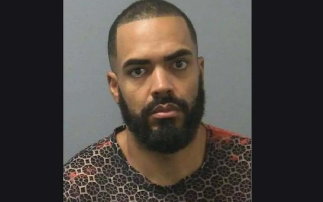 A Nevada woman bravely saved herself and her three children by calling 911 for help after being kidnapped by her ex-partner. Justin Carter is now charged with multiple felony counts for allegedly kidnapping and holding his ex and his three children at knifepoint in Nevada. The night of the incident a “pocket dialed” 911 call was received to the Mesquite Police Department, which alerted them to the moving vehicle that was holding the captives along with the suspect.

The call was made about 80 miles northeast of Las Vegas near the Utah State Line after midnight, where the woman spoke in a low voice and gave informative details. “The distraught caller was finally able to speak quietly to the dispatcher, saying she was inside a vehicle and needed help, but she was unable to provide many details,” police said. In the call, the woman left the line open and spoke cautiously, preventing Carter from reading her movements.

Mesquite police say there’s a reason an officer is dispatched to every “pocket dial” or accidental 911 call. On Monday, one such call led police to a suspect they say kidnapped a a woman and three children at knifepoint in Las Vegas and took them to Mesquite. The police department identified the location of the caller and stopped the vehicle carrying a man, a woman and three children.

The signs of the crime were evident and soon the victims were brought to safety along with the arrested man. “The bravery of this woman and her children cannot be underestimated. They kept their composure and she bravely created a plan in her head to call for help as soon as she could,” Mesquite Police Chief MaQuade Chesley told KVVU. , FoxNews.

Investigators learned the 34-year-old man had tried to stab the woman in Las Vegas before kidnapping her and her three children and holding them at knifepoint. The woman was praised for her instant thinking and coming up with a quick plan to call 911 for help. In addition, the police admitted that they always thoroughly investigate this method of seeking help, “dispatchers frequently receive ‘pocket dial’ calls or accidental calls to 911, and an officer is sent to each of those calls to control the caller and everyone else there.

She also resisted being handcuffed at the time of his arrest, which led to another rape charge. Justin Junius Carter pleaded guilty in November 2012 to assault with a deadly weapon and discharging a firearm into an occupied structure or vehicle, and was placed on probation for nearly five years on court orders. He is due to appear in court in connection with the current felony on October 26.