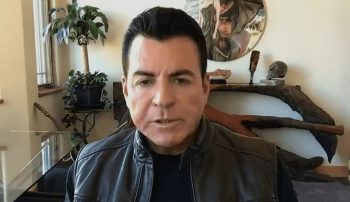 Papa John’s founder John Schnatter, who resigned from the company in 2018 for using the N-word, has come under fire online for an allegedly insensitive statement about Hurricane Ian. In an interview with OAN, he said the flooding “gives you a little bit of perspective… (on) how devastating this storm is.” He then reflected on the people who faced losses due to the hurricane. “You just can’t imagine how bad this is and my heart goes out to the people of Florida,” Schnatter said.

“Yes, I lost a house, but they lost everything.” The businessman, who has a net worth of $1 billion according to Forbes and owns more than 20 properties, was invited by OAN to talk about the house he lost in Naples. The clip that went viral shows the host saying, “Of course you’re in Utah right now, but we’re rewatching footage of his home in Naples. It looks like it’s completely underwater.” John Schnatter is also seen telling the newscaster that he isn’t worried about himself as he had “the resources and the equipment and the institutional knowledge.”

Schnatter’s remarks were met with fury on Twitter. The viral clip was shared with the caption “A new hurricane expert just dropped in.” The user who shared it also pointed out that the billionaire only lost “one” house, while others pointed out how Schnatter has the privilege of buying an entire neighborhood to recover the “loss” he suffered.

“Waaaaaa he lost a house so he will eventually buy the neighbors houses and build another tacky mansion,” someone wrote.Meanwhile, some attacked OAN for poor journalistic decisions and called the interview unnecessary. One user said: “It still amazes me that someone who was a real journalist would choose to work for OAN.” “They always find a way to bring these right-wing scammers and victims back. It’s exhausting,” said another.

Some ridiculed the channel for misspelling ‘hurricane’ on its ticker. One user wrote, “I’m actually part hurricane on my mom’s side,” while another simply said, “Hahaha, HURRICANE. I’m not even a hurricane,” joked a third. After John Schnatter resigned in 2018, Papa John’s released a statement saying he “condemns racism and any insensitive language, no matter the situation or setting.”