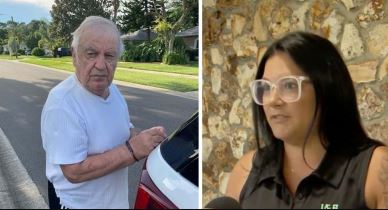 A Florida sex offender has been arrested for allegedly trying to “buy” an 8-year-old girl for $100,000 at a grocery store, police confirmed. Hellmuth Kolb, 85, made the proposal to the boy’s mother at a Winn Dixie in Port Orange, the Port Orange Police Department said. Kolb was banned from having contact with children and was also on probation for trying to buy another child at Walmart in 2018.

The Daily Mail reported that Kolb, originally from Austria, approached the girl’s mother, Lauren Benning, and made comments about the girl’s appearance. He then yelled at Benning and asked him to “make a deal” with him. He allegedly laughed at protesting bystanders after he made these indecent comments. Police found Kolb on a bench outside the store. When asked about the incident, he laughed and said, “We all like children.”

In a Facebook post, the Port Orange Police Department wrote, “On August 25, 2022, after a thorough investigation, the Port Orange Police Department’s Special Investigations Unit (SIU) responded to Sterling Chase Drive in Port Orange. At that location, they located and arrested a registered sex offender, Hellmuth Kolb. Mr. Kolb was under investigation in reference to an incident that occurred on August 16, 2022. That incident took place at the Port Orange grocery store. Orange Winn Dixie.While at that store on that date, Hellmuth Kolb attempted to buy an underage girl for $100,000.00 from her parents.Because of the parents’ clear concern that someone would insist on trying to buy their daughter at a grocery store, we were notified.

“Unfortunately for him, we were able to confirm through his Parole Officer that Mr. Kolb is currently on parole for similar issues and should not have any contact with minor children. Mr. Kolb should have simply limited himself to grocery shopping.” Thanks to our SIU, Mr. Kolb received a courtesy ride in one of our air-conditioned police cars and a free stay at Hotel 92 (VCBJ) If you have had similar contacts with Hellmuth Kolb, please contact Detective Nugent at 386-506-5894 or knugent@port-orange.org. Any additional information that can be provided would be appreciated,” the department added.

“He just came over and started making comments about how pretty he was and how well he danced and how he could never have children and wanted to have children,” Benning said. “He needs to be locked up and not allowed to be near our children.”

Kolb was arrested for a probation violation related to a similar incident that took place in 2018. Tracy Nigh was sitting with her daughter on a bench inside Walmart when Kolb approached her and offered to buy her. Nigh said that when she got up to leave with her daughter, Kolb grabbed the girl by her arms and legs and kissed her wrist. Nigh alerted store security, and authorities later said the incident was caught on surveillance camera. Kolb was identified through his credit card transaction and social media, where a different woman recounted a similar incident.