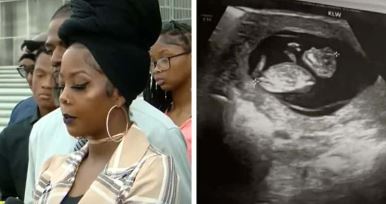 A Louisiana woman has expressed outrage after her state’s abortion law denied her an abortion even though her unborn child would not survive. Nancy Davis, who is 15 weeks pregnant, announced that she will leave the state next week to have a “medically necessary” abortion because the fetus she is carrying has a fatal condition called acrania. Davis learned of her unborn child’s condition at her first ultrasound which revealed the baby has acrania, a terminal condition in which the baby’s skull fails to develop in the womb. Children born with the condition usually die minutes to hours after birth.

The Davis ban law prohibits all abortions except when the woman faces a significant risk of death or disability if she continues her pregnancy, and in the case of “medically useless” pregnancies. Davis was told that if she carried the pregnancy to term and gave birth, the baby would most likely survive from a few minutes to a week. She also criticized the vague language of her state’s abortion law for subjecting her to suffering because she does not want to live through the traumatic experience of that birth.

On the steps of the Louisiana Capitol building, Nancy Davis of Louisiana spoke with her attorney Ben Crump about having to travel to another state because she couldn’t get an abortion in her own state on Friday, August 26. She said: “Basically, they said I had to hold my baby to bury my baby. They seemed confused about the law and afraid of what would happen to them.” “Louisiana lawmakers inflicted unspeakable pain, emotional damage and physical risk on this beautiful mother,” attorney Crump said of Davis.

Along with her attorney, Ben Crump, she has criticized the way the law has been applied to her for months, saying it is intentionally vague and confusing. “Ms. Davis was one of the first women caught in the crosshairs of turmoil in Louisiana’s rush to restrict abortion, but she is hardly the last,” Crump said.

Although doctors advised Davis to have an abortion, they said they couldn’t go through with it because doing so would subject them to up to 15 years in prison in Louisiana. Woman’s Hospital spokeswoman Caroline Isemann said in a statement to the media last week that the hospital could not comment on a specific patient, but reiterated that the hospital’s goal is to offer “the best possible care for women.” while adhering to state laws and policies Sen. Katrina Jackson, the bill’s author, and other lawmakers have since claimed that Davis is eligible for an abortion and that the hospital “grossly misunderstood” the law.

“The law is clear as clay,” Crump said. “Every woman’s situation is different and subject to interpretation, so of course medical professionals don’t want to risk jail or have to pay hundreds of thousands of dollars in fines for making the wrong call.” Who would take someone, what is your word when your freedom is in danger?

Davis wants the Louisiana legislature and Gov. John Bel Edwards to hold a special session to clarify the law, and she has yet to file a complaint or sue. The next regular session of the Louisiana legislature is scheduled for April 2023. “Imagine how many women can be affected before (lawmakers) are back in session,” Crump said. “How many more Nancy Davis will have to endure mental anguish and mental cruelty before lawmakers clarify these vague and ambiguous laws?”

In Roe v Wade, the United States Supreme Court recognized a woman’s constitutional right to abortion in 1973. The landmark decision legalized abortion nationwide, but divided public opinion and has been criticized ever since.The overturning of Roe v Wade gives states more freedom to decide whether women have the right to an abortion, which is becoming increasingly difficult in some states. A Florida court recently ruled that a 16-year-old orphan girl cannot get an abortion because she “isn’t mature enough” to make the decision. The teenager, who has no parents, is now appealing the decision after a judge barred him from terminating her pregnancy.