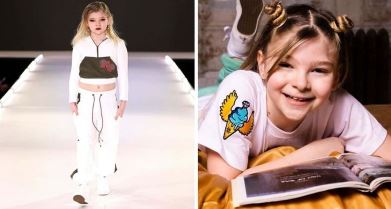 Noella McMaher, 10, who recently made headlines for being the world’s youngest transgender model to walk New York Fashion Week (NYFW) in February and will walk the NYFW runway again in September, “I could make a million to two million dollars in the next year,” says a Hollywood agent. Noella, who is now bombarded with modeling offers and will walk in Paris Fashion Week this year, received “additional media attention” after it was announced that she had been hired to work as a model until November this year, according to Reduxx.

Speaking about her future, the Hollywood agent was quoted by DailyMail as saying, “Noella is a phenomenon. She’s only ten years old, but she represents a lot in terms of where the world is right now. We are seeing more transgender models and she is the ultimate in terms of being a role model.” The agent further said, “She is so confident for someone so young. She is capable of earning between one million and two million dollars next year.” However, he too has raised some concerns. The report suggests that an activist described it as “abhorrent” and said that Noella’s mother, Dee, pushed her to become trans.

A Chicago-based scientist and Noella’s biological father, Timothy McCord, was against her transformation and allegedly forced Noella into boys’ pajamas, resulting in the boy’s arm being broken, according to DailyMail reports. Dee, who has split from Timothy, is now married to Ray, a 32-year-old biological woman who has identified as transgender since 2019. Dee confirmed to DailyMail that they are both non-binary and are raising a baby as non-binary. .

Dee refers to the baby as “theybie”. Sinead Watson, who transitioned from female to male at the age of 23 but changed her mind and transitioned again four years later, said: “We’re seeing more and more parents with Munchausen syndrome by proxy. It’s not the kids those who are trans, it is the parents who want them to be trans”.

As previously reported, Dee told the New York Post that Noella was misbehaving and she didn’t like wearing masculine outfits when she was a child. Dee said that once she was finally taken to a gender clinic and she felt liberated from being a woman, she felt herself. “Our job as parents to our three children is to accept their individual needs. With Noella we have a little girl who knew who she was from a very young age,” Dee said. Noella was not pressured to be a woman, she added.