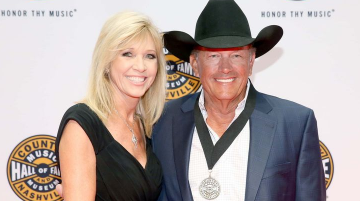 George Strait is reportedly ready to retire and become a full-time rancher, but his wife Norma disagrees and isn’t ready to give up the celebrity life just yet. The country legend, 70, and his wife, also 70, recently sold his San Antonio estate for a whopping $6.9 million. Now, the ‘Down and Out’ singer is looking forward to kicking back and relaxing on his 8,000-acre Texas ranch near the Mexican border.

However, well-placed sources said that Norma, who has been married to George for 55 years, was not ready to settle down. “George has played in front of millions of fans in his career, but the only faces he wants to see now are his horse and his cattle,” a friend of the legend told RadarOnline. “He may be an international superstar, but George is basically a loner. He is happiest when he is at the ranch, away from the world,” added the source.

The outlet noted that the closest town to the ranch, Catarina, has only 100 residents. The closest city, Cotulla, has a population of just 3,700 residents. . “You have to drive half an hour to get a liter of milk!” another close friend of the couple told the outlet. “George’s life away from acting is all about ranching and lassoing, but Norma loves shopping in fancy stores and having nice lunches with her friends.

Norma also loves the ranch, but not as a 365-day-a-year proposition.” George, who has a country music record of 60 No. 1 hits, is reportedly determined to fulfill his dream in the final chapter of his life. “It’s a major sticking point between them,” a friend said of the couple, noting that they were still arguing about the move.

George and Norma attended high school together in Pearsall, Texas, southwest of San Antonio. “We’ve known each other forever, we grew up in a small town. I never really thought about her, but one day I asked her out and we went on a date. We didn’t see each other for a long time after that,” George told the country radio station. Bull 100.3. “Then one day I was like, ‘I’m missing the boat here,’ and we started dating again.”

The lovebirds eventually eloped in Mexico on Dec. 4, 1971, and were later married at the church in Pearsall, according to Country Living. George subsequently enlisted in the US Army and was assigned to Schofield Barracks in Hawaii, where he was joined by his new wife. The couple welcomed their first child, Jenifer, on October 6, 1972. Their son, George Strait Jr, was born in 1981.

Jenifer was tragically killed in a car accident in San Marcos on June 25, 1986, at 13 years. While George has for the most part remained private about his family over the years, he gushed about his fairytale marriage to People. “Norma and I are so blessed to have found each other … and we were able to do all of this together, experience this life together, support each other through everything, through the good times and the bad,” she told the magazine in 2012. “We do just about everything together. … We love each other and still like each other. A lot!” he added he.