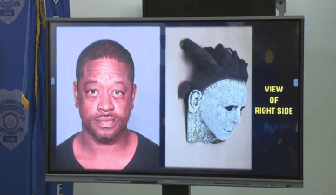 Over the weekend in North Las Vegas, police shot and killed a man brandishing a gun and threatening bystanders while wearing a Michael Myers mask. According to Local 12, the masked man, Christopher Earl Smith, 44, died from numerous gunshot wounds following a confrontation with police on Sunday, October 16, in a public park. The North Las Vegas Police Department (NLVPD) received complaints about a man threatening to kill people while donning a Halloween mask and has opened an officer-involved shooting investigation.

Dispatch received a call about a man trying to pull a gun on the person he called near Martin. Luther King Boulevard and Carey Avenue shortly after 5:15 p.m. m. of Monday. “I work at the Carry Mini-mart, we have a guy who had a gun and pointed it at a couple of customers. He is a little crazy,” reported an anxious person who called dispatchers. According to police, the call was dropped and they were unable to connect when they called back.

Police were dispatched to the scene but, according to the department’s public relations officer, Alexander Cuevas, they were unable to find the suspected gunman. Minutes later, around 5:35 p.m. m., the office received another call from the same person saying the man was at a nearby car wash. When the dispatch asked why they hadn’t returned the agency’s call, the person he called said they were “trying to keep from getting shot.” mask, according to police. Then the office received a second call from a nearby convenience store.

According to police, the second caller described a man brandishing a gun at customers before leaving the store and heading toward the North Las Vegas Justice Center. The person he called also mentioned that the man was wearing green socks and sneakers. An officer later approached the suspect in the Justice Center park. He was thought to be sporting a “Michael Myers-style” Halloween mask.

Officer Anthony Malear saw Smith, identified himself as a police officer and twice urged him to stop where he was and put his hands up, according to body camera video released by police. The video shows Smith approaching five witnesses as he began to reach for the allegedly stolen gun on his belt. “Stop reaching, don’t reach!” Malear can be heard screaming, before firing eight bullets at Smith.

Police discovered video of the suspect leaving the mini-mart near the incident area and were able to identify him as Christopher Earl Smith. According to the coroner, Smith had a combination of oxycodone, alcohol and THC in his body. He reportedly had a long criminal history, including an attempted arrest for murder.