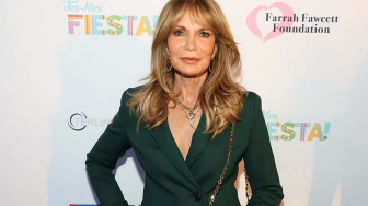 ‘Charlie’s Angels’ icon Jaclyn Smith, who has aged like fine wine, cast a spell on her fans with her timeless beauty while attending a benefit for the Farrah Fawcett Foundation in Dallas, Texas on Thursday, October 20, 2022 According to The Daily Mail, the 76-year-old veteran actress flaunted her youthful looks and beaming smile at the Farrah Fawcett Foundation’s Tex-Mex benefit party while posing with her friend ‘Dallas’ star Linda Gray, 82. years.

Gray was also honored at the event and was even seen sharing the stage with the star. For the star-studded night, the icon channeled her inner diva and opted for a dazzling chic outfit. Smith, who rose to fame for her portrayal of Kelly Garrett on the hit series ‘Charlie’s Angels’ which aired in 1976, opted for a dark green pantsuit that perfectly complemented her slender, sensual figure.

She accessorized her look with honey-colored locks out and around her face and sleek, elegant makeup, which included a dewy foundation, layers of bronzer, and a nude lip. While Smith stole the glamor light with her elegant outfit, her friend Ella Gray looked stunning in her monochromatic look. The ‘Dallas’ star rocked a pair of brown pants and leather boots, which she teamed with a white wrap top.

Working religiously since 2010, the foundation has worked with a number of institutions, including Duke University, Brown University, Harvard, and Vanderbilt. Smith is one of the few celebrities who never shy away from flaunting her alluring beauty. Stealing hearts since 1976, Smith has wowed time and time again with her looks. She is also an avid user of social media and is often seen sharing her daily updates with her followers.

In early 2022, the actress, who has also designed her own clothing line, took to her Instagram account to share her secret remedy to look forever young. The bombshell, who works out regularly and does yoga, said a green smoothie can work wonders. She said that she eats a lot of healthy food, “lots of berries and vegetables” while she exercises regularly. She doesn’t smoke or drink.

“You’re looking at a clean living girl,” she said. She says that she’s not into major plastic surgery even though she has “little things” that she wants to do because she could go wrong. But that doesn’t stop her from getting peels and laser treatments. “You want to be careful because you want to look like yourself. You don’t want to look like plastic,” she said.