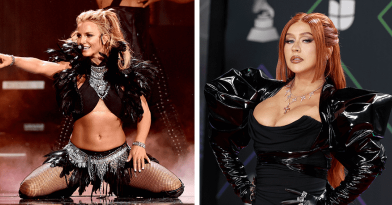 Britney Spears is quite well known for making bold statements through her posts. The ‘Baby One More Time’ singer has often received criticism due to her statements, but that hasn’t stopped her from creating new controversies. Britney recently came under fire for ‘body shaming’ Christina Aguilera’s backup dancers with an ‘offensive’ message on her Instagram post. ‘artists to make her look bigger on stage.

“I wish I could have chosen the babysitters for my kids… my dancers… I mean, if I had Christina Aguilers dancers, I would have looked extremely small… I mean, why not talk about it? Don’t you think? My confidence would have been a little better if I could choose where I lived, ate, who I phoned, dated, and who was on stage with me! Sometimes it’s hard now that I see how much of my femininity was stripped away! at that point and all the people just sat there and didn’t say anything!!! Anyway… I’ll be here talking about things that people NEVER talked about!!!” Britney wrote in her Instagram post on Monday with a picture of a Rodney Dangerfield quote: “I found out there was only one way to look skinny and that’s hanging out with fat people.” Britney deleted the post due to shock.

The singer was opening up about her feelings of not having freedom due to her father’s guardianship; she wished she could choose in her life and that no one would speak for her. Spears went on to say that her confidence could have benefited if she had been free.

The singer was opening up about her feelings of not having freedom due to her father’s guardianship; she wished she could choose in life and that no one would speak for her. Spears went on to say that her confidence could have benefited if she had been free. “Oh honey, delete this while you have time,” one follower of hers urged. “Britney… body shaming is out,” one person wrote.

“There is so much more to life than looking skinny,” another person added. “This is so fucking offensive Britney,” said another fan. However, Britney was less concerned about the issue, saying in a now-deleted voice memo that she didn’t mind offending others because she had been offended her whole life. This is not the first time that Britney has dragged Christina on her social networks. In November 2021, she called out Christina for keeping quiet about her struggles to keep her.