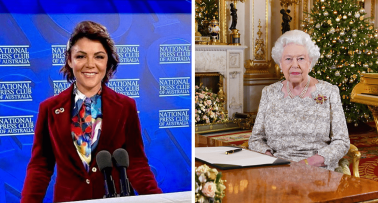 Em Rusciano recently spoke about her thoughts on the passing of Queen Elizabeth II, who died on Thursday, September 8 at the age of 96. The queen, who was struggling with mobility problems, passed away peacefully at her Balmoral residence.

Speaking about the Queen in the latest episode of her podcast titled “Emsolation,” the former radio star said the late monarch should have apologized to the indigenous people during her reign. “Now I know that association is a form of non-indigenous privilege, white privilege,” she said.

During the podcast, Em reminisced about her grandmother, who did her hair the same way as the Queen and visited Buckingham Palace. She said her grandmother’s appreciation of the royals was a “privilege.” “So when I woke up to the news of her passing, my initial reaction was a twinge of sadness for my grandmother. Then all of a sudden I started feeling bad because I know better,” Em continued.

“And I know that her legacy is not just one of epic stoicism and record service to country, that she was not just a harmless nanny who loved a brooch. Her legacy was also undeniably intertwined with colonialism, forced slavery, genocide, theft and the dispossession of indigenous peoples from their lands,” said Em.

The former singer noted that many people argued that during her reign, the queen had ample opportunity to “apologize and make up for what the British colonial empire did to the countries she colonized.” Em added: “The Queen’s death and the various complex reactions show us that the history of the monarchy needs to be thoroughly examined and discussed. It is time. This is shedding a very harsh light that needs to shine on how the crown used its power. to oppress marginalized communities.

Her Majesty died at her Balmoral residence just days after meeting the new Prime Minister of the United Kingdom, Liz Truss, on September 6. Buckingham Palace had tweeted a statement on September 8 revealing that the Queen had been “under medical supervision” at Balmoral after royal doctors raised concerns about her health.