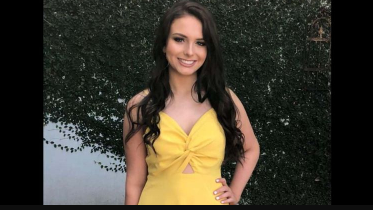 Prosecutors believe Louisiana State University (LSU) student Allison Rice was killed in a random attack. However, rumors that have been surfacing suggest that the murder may have been part of a gang initiation. The 21-year-old died after being shot more than 10 times while waiting at a train crossing in Louisiana, eating potato chips. At the time of the murder, she was returning home from a night out with friends.

The Louisiana State University senior was discovered dead inside her bullet-riddled car in Baton Rouge on Friday, September 16. She had been partying with friends at a bar on Government Street, not far from where she was killed. She was possibly trying to turn onto the tracks when someone shot her several times through her windshield.

Allison Rice Cause of Death

Baton Rouge District Attorney Hillar Moore told WBRZ that the real motive behind Allison’s murder remains a mystery. Detectives are at a loss as they have yet to identify a motive behind the student’s brutal murder. “This appears to be a totally isolated random type act,” Moore said. “It’s too early to tell. We never want to come out in front of the evidence and the facts of the case. Surely that’s not something that stands out to me as a person who has done this for years.”

While no arrests have yet been made, police have reportedly been inundated with clues as to the identity of the killer. However, it is unclear how credible the advice is. The prosecutor confirmed that several federal law enforcement agencies, including the FBI, DEA and ATF, have been brought on board to assist in the case.

“I just hope someone speaks up. Someone who knows something, someone who was here in this area,” Allison’s father, Paul Rice, was quoted as saying by the Daily Mail. “Please, if you’ve seen anything, please call the police department, call Crime Stopers, call someone. Tell someone, call me.”

Paul had previously said that he believed his daughter was killed because she was “in the wrong place at the wrong time.” He also said that she had no enemies, and he doesn’t think she had a stalker either.

Authorities found multiple shell casings near the car Allison was discovered in. Spilled fast food was found on her lap, but nothing was stolen from the car. Allison sustained injuries to her arm and chest.

A Baton Rouge police spokesman said, “Rice was shot multiple times while she was sitting in the driver’s seat of her vehicle. Rice died at the scene. The motive and suspects are unknown at this time.”

Rice’s death is the 74th this year in the East Baton Rouge parish. It comes after several other crimes were committed against LSU students. A student was shot during an attempted robbery on August 19, 2022 and there were two separate kidnapping cases on campus just days later. Baton Rouge has one of the highest homicide rates in Louisiana, the FBI said.