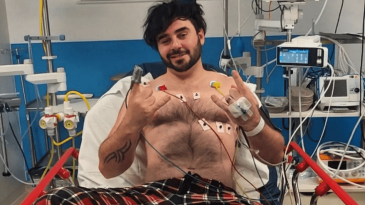 In a freak accident, a man was struck by lightning while playing the PS5 game Stray in his living room. It was nothing short of a miraculous escape for 33-year-old Aidan Rowan, as he sustained several burns to his body and was likely left unconscious for a few seconds before regaining consciousness. The incident likely occurred around 10:30 p.m. m., last Monday, September 5, when lightning struck him behind the window.

According to The Sun, Aidan said: “There was a very loud crack like thunder, then it felt like someone dropped something very heavy on my whole body.” He added: “It lasted for a few seconds, and then I felt this burning in my arm that was so hot it almost felt cold. That’s the last time I play a cute cat game during a thunderstorm I think!” According to doctors at Oxford’s John Radcliffe Hospital, the markings are “consistent with lightning.”

The man had suffered about 60 burn marks on his arm, including one that looked like an explosion near the palm of his hand, muscle damage and a burn to his foot. His in-laws took him to the hospital and kept him under observation for more than seven hours, before he was allowed to return home.

Aidan shared the photographs of his burned body on his Instagram post. He wrote in the caption how lucky he was to still be alive after the ‘crazy’ accident. The Oxon man said that he was enjoying his PlayStation game on his computer when he suddenly heard a loud explosion. The impact left his entire body ‘shaken’, and doctors confirmed that it was lightning that struck him.

“I am absolutely not one for sympathy messages, I had to share this because of how crazy it is. I was happily playing #stray on #playstation when there is a heavy thud and I feel a strong jolting sensation. 5 hours in the hospital confirmed that I was STRIKED BY LIGHTNING through the open window! I will never play cute cat games during a thunderstorm again. I’m fine just so sore, a hell of a headache and burnt scratches on my arm,” Aidan’s post read.