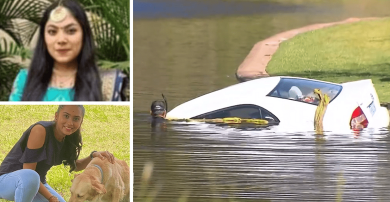 Authorities have identified two women who drowned after their car plunged into a lake. Nidhi Lalji Hirani and Ruxmi Premji Vaghjihani, both 20-year-old best friends, were on their way to work from their home in Perth when they walked into a lake in Aveley around 6:40am on Sunday 11 September. Investigators revealed that the duo were traveling in a white car. Toyota when they made a sudden right turn onto Egerton Drive at Gnangara Road and for unknown reasons continued to drive across the center strip before falling into the lake.

The two Edith Cowan University students died at the scene despite bystanders rushing to their aid and trying to rescue them from the sinking car. They had tried to break the windows, unfortunately they were unsuccessful.

One of the first responders, who identified himself as Singh, told 7NEWS that since he couldn’t swim, he sought help from other people driving the same road and managed to stop a man. This man swam up to the car and tried to break the glass with a wrench. “I was the first to notice them and when I stopped I could see that they had tried to break the windows but they couldn’t get them open,” Singh said, adding: “By the time he got there the car was completely under water in two or three minutes. The police were here within 10 minutes, but it was too late. I think it’s tragic that we couldn’t pull this off and I never expected it to end like this,” Singh said.

According to officials, the couple had moved to Perth in February and stayed with Vaghjihani’s aunt and uncle. Vaghjihani’s uncle, KP Halai, said that just minutes before the tragedy, he received a call from his niece, who was pleading for help because they were trapped in the car and couldn’t break the window. “She said, ‘Man, we had an accident and our car is in the pond and we’re slowly drowning,’ and I said, ‘Where are you exactly?’ and I told her to try to open the door or try to break the glass and she said, ‘We’re trying but it won’t open,'” Halai told 7NEWS. “As soon as I got there, I could hear them banging on the glass,” she added.

“These are the first stages of the investigation. We don’t have anything other than we don’t believe any other vehicles were involved,” Police Inspector Craig Collins said. Friends and family of the two are devastated after learning what happened. Dhanji Bhudia, a close family friend of the two women, said he now had the difficult task of informing the duo’s families of their death.

“I was a little worried about how I would tell his parents. They were silent for a while, and obviously her mother immediately started crying. It was very, very difficult to believe that they passed away and the circumstances. Even now we cannot understand that this really happened, said Bhudia. He revealed that the two girls were deeply religious and used to visit the Shree Swaminarayan Temple quite often. He said that given his faith, alcohol or drugs could be ruled out “100 percent” as a factor in the crash. “These girls are very, very well educated, they don’t drink alcohol, they don’t smoke. We are a very strict religious group,” he said.