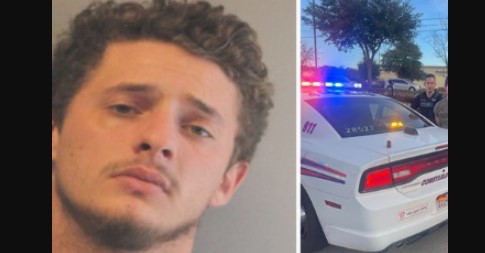 A Texas man is facing charges after authorities say he kidnapped, tortured and sexually assaulted a woman he met on a dating app. Zachary Mills, 21, has been charged with first degree felony aggravated kidnapping. His neighbors had a lot to say about the jarring allegations against him detailing the reported kidnapping that began on Christmas Eve and lasted for five days.

“People are crazy,” said neighbor Keyana Archer. “It’s pretty scary with the new world of dating that’s only mostly done online.” Zachary Mills, 21, has been charged with first-degree felony aggravated kidnapping after authorities say he assaulted a woman he met through Bumble and held her captive for five days. According to court documents, the victim met Mills on the dating app Bumble and agreed to visit him on Christmas Eve at his apartment in Spring, Texas.

Once he got there, he allegedly tried to have sex with her and she refused. Records show that Mills then began hitting, slapping and biting her. He is also accused of raping her and beating her with a screwdriver when her hands got tired.

Authorities believe Mills deprived the victim of food and water during the five days he was allegedly held captive. The documents go on to say that the victim was finally able to escape and get help when Mills left Thursday to go to his father’s house. Investigators say he suffered severe bruising to both eyes, bite marks and cuts to both his throat and nose, and severe bruising to most of his body.

Mills was arrested Friday. He has since been released from jail after posting $50,000 bail, but he is under 24-hour house arrest in addition to essential travel, according to his attorney. He is scheduled to be arraigned on the aggravated kidnapping charge in March and could face further charges.

A Bumble representative said in a statement that Mills has been banned from the app. The company also offered seven safe dating tips that include always meeting in a public place, telling someone you trust where you’re going, and researching the person you’re meeting as much as possible.