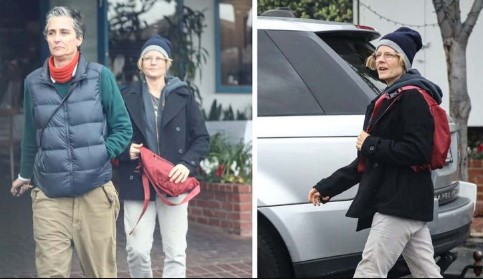 Academy Award-winning actress Jodie Foster and her wife Alexandra Hedison were seen having a great time while making a rare public appearance for lunch in West Hollywood recently. The couple was bundled up for the gloomy weather. The couple have been married for eight years and dated for a year before tying the knot. Hedison had dated Ellen DeGeneres before her marriage to Foster.

Prior to her marriage to Hedison, Foster was in a long-standing relationship with producer Cydney Bernard, whom she met on the Sommersby sets in 1993. They dated for fifteen years until 2008 and also have two children together, born in 1998 and 2001. However, despite her longstanding relationships, Foster admitted to The Guardian in an interview that career-wise,

“I wasn’t very good at playing the bride, so no, I never did that.” he pair looked quite casual and comfortable in jackets and coats. The ‘Silence of the Lambs’ actress wore a navy blue beanie with gray trim on her head, with part of her short blonde hair sticking out from under her.

She did not wear makeup as she wore a black t-shirt under a gray zip-up hoodie, which she paired with a black coat. She was also wearing a pair of cream pants and black shoes when she came out, along with her glasses. He also carried a red bag with him.

As for her wife, the actress and photographer Hedison wore a green sweater under a navy puffer jacket, her short hair tied back. She was wearing brown pants and gray sneakers with a blue crossbody bag. She also added some zing to her look with a bright orange scarf.

Foster has been extremely private about her relationships and her family, but she did take a moment to talk about her children and her journey through motherhood in an interview with Porter. “I mean, there were so many surprises about it. It has been such a creative experience for me.

That’s probably why I worked so little when the kids were [younger]. A day of putting Legos together and making up a song about peanut butter was all the creative I needed to be,” she said.