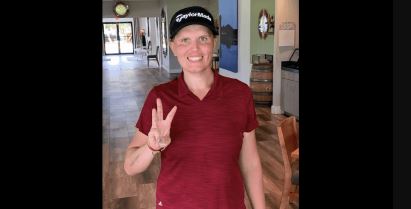 Golfer Hailey Davidson is putting all of her efforts towards becoming the first transgender woman to receive a Ladies Professional Golf Association (LPGA) tour card after clearing two rounds in the first stage of 2022 LPGA and Epson Tour Qualifying School. The Scotland-born golfer, who now lives in Florida, reportedly hit a 70 at the Shadow Ridge Golf Club in Palm Desert California, on Thursday, August 18, and then on Friday, shot a 76.

Fox News reported that the rule for the LPGA tour states that “any player with a score of 88 or higher in any of the first three rounds will automatically be dropped from the qualifiers and ineligible to receive Tour status for 2023.” The participants who get scores below 88 on all three stages “will earn 2023 Epson Tour Status”. The top 100 will then get a chance to compete in Stage II starting October 18 before the final stage that will take place during the initial weeks of December.

According to reports, Davidson is currently ranked 59th and will easily enter Stage II in October. The 29-year-old’s participation follows the LPGA Tour’s policy change that occurred in 2010, ending the “female at birth” eligibility criteria. However, Davidson believes there is much to be done. Speaking on the ‘Like It Is’ podcast, she said: “I’ve seen that it’s not about protecting female sports or me having an advantage, it’s just that you don’t like trans people.” It’s so sad that she’s reduced to that. In the last few months, that’s what I’ve come to learn.”

Previously, in June, she had stated that “I know that what I can do within professional sports can hopefully bring people to their senses to stop hurting these kids. Making money on a golf course is great and all, but what’s really important is the lives of the people who are affected by it. I’m going to find a way to make sure each and every one of those laws is gone before I leave this earth.”

Davidson had previously played as a man in 2015, but after that she began her hormone therapy treatments before undergoing gender reassignment surgery last year. In 2021, he stated, “I know I have what it takes from being surrounded by professional golfers on the LPGA/PGA/Champions Tour for the last few years and being very competitive with all of them. While I know I have the talent and mental game to make a career out of playing, the upfront cost of tournaments and practice expenses is what really holds me back.”

Meanwhile, not many people seemed to approve of Davidosn participating in women’s golf. One person wrote: “Isn’t there an LGBTLPGA I can play with? If not, there’s surely a couple billion in Biden’s Build Back Worker inflation/cheating bill for it.” The second tweeted: “That’s so wrong.” “Excellent. A real woman should never win a sports contest again,” said the third, and the fourth added, “When do we finish this nonsense?”