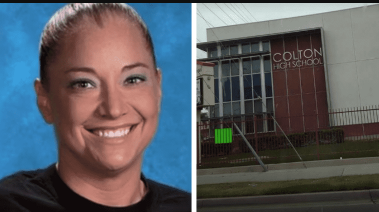 Six Colton High School football players are suing their school district and athletic trainer alleging that she sexually abused them and raped them in the 2000s. The six anonymous men, identified as John Does, say their trainer Tiffany Gordon raped them while they played football between 2000 and 2007.Gordon worked as an athletic trainer under her father and longtime coach of the same school and athletic director Harold Strauss before she became the athletic director at Grand Terrace High school.

One of the players identified as John Doe 7045 claims when he told a coach that he and another student were being abused and their plans to report it to the district, the coach’s wife suggested it would not be successful. “Despite rampant rumors surrounding Gordon’s misconduct, (the school district) knowingly, intentionally, willfully, deliberately, negligently, and/or recklessly allowed Gordon to continue abusing Colton High School’s varsity football players, including plaintiffs,” the lawsuit reads according to Daily Mail.

The football players were able to report these allegations under Assembly Bill 218, which took effect on January 1 and gives alleged victims an extended statute of limitations for civil claims. Brian Williams, the lawyer defending the athletes said, “This important law gives survivors of sexual abuse an opportunity to be heard and a chance to heal.”

Another victim John Doe 7043 had transferred to the school during his senior year 2003. While on the football team, he said Gordon made advances on him while inviting him to a drive-in theater, during which she sexually abused him in the backseat of the car.

Players alleged that Gordon’s actions were considered “normal” and “lauded” by other coaches. His abuse continued to escalate throughout his time at school and he then alleges he was raped by Gordon in the school’s locker room, bathroom, school weight room, and in a trailer.

One of the victims claims after he heard rumors of Gordon’s sexual abuse he confronted the trainer, who then allegedly asked him to send her nude pictures of himself. Gordon then started to sexually assault him the next day and continued to do so until he cut contact with her.

The victim then claimed the school could’ve stepped in anytime to do something but they did not. John Doe 7044 added he believes certain players were targeted because they needed money to buy food and rides home from school. They added that the abuse has significantly affected and shaped the students’ perceptions of intimacy, relationships and responsibilities at a young and impressionable age.

Another alleged victim, John Doe 7046, said he was allegedly sexually abused by Gordon while he was on the team. He claimed Gordon sexually abused him in the locker room during 2007 Halloween when Gordon’s father Strauss interrupted them and asked why the lights were off.

Gordon allegedly said that they were “just closing up and leaving.” The abuse continued throughout John Doe 7046’s senior year. John Doe 7046 continued to say abuse affected his relationships later on his life, especially when his won child has reached high school.

“Every year, I was thinking there was more kids getting put in danger and more kids probably ending up like me and being touched and messed up,” he said. “I knew it was wrong then, but I was so young and as I got older, you see things as they really are.”

“I felt like we couldn’t say anything. That our words wouldn’t have mattered,” John Doe 7046 added. “When I got older, I didn’t want my kid or anyone else’s kid to feel like how we felt like we didn’t have a voice.”

The school district said it has made itself “completely available” to the Colton Police Department amid the investigation. Meanwhile, Gordon has been placed on administrative leave.