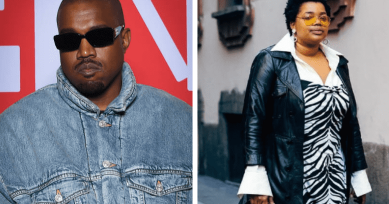 Kanye West’s latest fashion show has sparked huge controversy after he debuted his “White Lives Matter” sweatshirts, prompting celebrities to allegedly walk out of his show. Vogue editor Gabriella Karefa-Johnson who was also in attendance at the fashion show and called the shirts “indefensible” “dangerous” and “violent.

West debuted the shirts, which he and conservative Black commentator Candace Owens modeled, during his YZYSZN9 fashion show at Paris Fashion Week on Monday, October 3. Candace Owens had recently called West’s ex-wife, Kim Kardashian a “prostitute”. West took to Instagram to criticize Karefa-Johnson for calling out his collection. After his broadside many celebrities came forward to defend the Vogue editor.

The ‘White Lives Matter’ is a movement that came in response to the ‘Black Lives Matter’ which gained ground after the fatal shooting of Trayvon Martin by George Zimmerman. In a series of Instagram posts, West attempted to discredit Vogue editor Gabriella Karefa-Johnson and said, “this is not a fashion person” before sharing the ominous text “this means war”.

West also shared an exchange of texts with a person called Mowalola, presumably fashion designer Mowalola Ogunlesi who texted West to “not insult the writer” and urged him to “have a real conversation”. Karefa-Johnson shared videos from Ye’s show captioned, “Here come the bulls**t. I’m fuming.”

She added it was “indefensible behavior,” while calling the collection “deeply offensive, violent, and dangerous.” In response, West told his followers, “You speak on Ye Ima speak on you Ask Trevor Noah.” Referring to an incident when Kanye West called out racial slurs against Trevor Noah and branded him a ‘k**n’ after Trevor said West’s treatment toward his ex-wife Kim Kardashian was “terrible to watch.”

West also shared a picture of Johnson’s Timberland boots and added, “I KNOOOOOOW ANNA HAAAATES THESE BOOTS,” referring to Vogue Editor Anna Wintour. He also shared a screenshot of the stylist’s Instagram profile and captioned, “Broke the processor When the computer can’t read the code This is a droid” and concluded by saying “This means War.”

West’s criticism even prompted supermodel Gigi Hadid to defend Johnson, with whom Gigi has worked many times in her carrier. While Johnson also claims, she shares a “true friendship” with the model. Hadid wrote, “You wish u had a percentage of her intellect. You have no idea haha…. If there’s actually a point to any of your s**t she might be the only person that could save u.”

“As if the ‘honor of being invited to your show should keep someone from giving their opinion ..? Lol. You’re a bully and a joke,” she said on Instagram. Gigi further went on to add on her story that Karefa-Johnson was “one of the must important voices in our industry and could school that disgraceful man in more ways than he knows.

” Followed by a lengthy statement from Vogue writer José Criales-Unzueta who accused West of “publicly bullying” the stylist and said of his latest collection, “It’s not smart. It’s not interesting. It’s not nuanced. It’s dangerous.” After Gigi was spotted at the rapper’s show, she made sure there was no doubting her loyalty, “My attendance somewhere does not mean I agree with everything being said in the music playing there. My friends know of my loyalty.”

Outspoken West continued to write, “Everyone knows Black Lives Matter was a scam. Now it’s over. You’re welcome,” on his Instagram story. In response to Jack Paul McClinton’s question to Van Lathan, “Do white lives not matter?” Van lathan responded, “We don’t need a reminder of the worth of white lives.

America is a shrine to the worth of white people. This message is reactionary to a message affirming the worth of Black lives, which have never been worth anything in America.” He continued, “In its intent, it’s a white supremacist notion.

Because it posits that we can’t have a conversation about the worth of Black people without having a conversation about the worth of white people, which is f***ing insane. The notion that it ALWAYS has to be about white people in America is incredibly frustrating, emotional draining, and the whole problem. But here’s Kanye, apparently centering that notion,” he concluded.

Rapper Boosie Badazz, who famously bragged about paying prostitutes to perform oral sex on his son, then 12, and nephew, then, 13, called out on West and said, “After all we been through as a race you put this disrespectful s*t on? U give no fks about how blacks have died n suffered to the hands of the white man n u say Bush don’t like black people… really n***a.”

Temple University Professor Marc Lamont Hill tweeted the picture of West together with Owen and wrote, “Kanye West decision to wear a ‘White Lives Matter’ shirt is disgusting, dangerous, and irresponsible. Some of y’all will rush to defend him. You should ask yourselves why…” Former ESPN presenter Jemele Hill said: “So many folks are trying to excuse West wearing a white