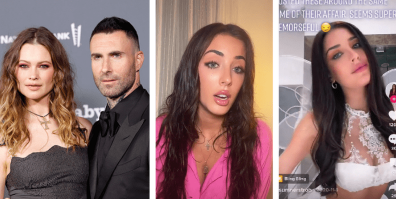 Sumner Stroh, an Instagram model from Texas living in California, shocked the entertainment industry on Monday, September 19, 2022, after she shared a video of alleged screenshots of her text messages with the Maroon 5 singer. , Adam Levine. Levine, 43, who is married with two children to Behati Prinsloo, 34, a pregnant Victoria’s Secret model, reportedly said he wanted to name his unborn child Sumner after the model. The Instagram model also shared several screenshots of alleged text messages from the singer flirting with her.

Now, many fans on the internet decided to dig into Stroh’s past, pointing to the other TikTok posts she uploaded while she and Levine were reportedly having an affair. One Twitter user posted one of Stroh’s earlier videos and added, “NOT THE GIRL WHO HAD AN AFFAIR W ADAM LEVINE POSTING THIS DURING HIS ALLEGED AFFAIR of hers.” In the video, Stroh could be seen smiling at Maroon 5’s ‘Beautiful Mistakes’. The video’s caption read, “I look at my life and I just laugh sometimes.”

Another user posted another TikTok video of Stroh, who noted, “No people also found this on their page during the adventure… ICK.” Stroh can be heard singing along to Olivia Rodrigo’s ‘Driver’s License’ in one of the videos. The song’s lyrics say, “And you’re probably with that blonde girl,” but the audio then changes to a voice saying, “Uh, I guess not!” Although the video was uploaded in March 2021, several TikTok viewers noted that it appeared to be a sly jab at Prinsloo, who is blonde. “Blonde girl? Does she sound familiar? Maybe Victoria’s Secret model Behati?” commented a user in the comments section of the video.

Meanwhile, after posting the candid video, Stroh faced backlash online, with some accusing her of playing the victim by claiming Levine had “manipulated” her. He added in a subsequent video that was posted on Monday night, September 19: “I was in no way trying to gain sympathy, and I fully realize that I am not the victim in this. I am not the one that is really being hurt here. “. , it’s Behati and her kids, and for that, I’m so sorry.” Levine also stated on Instagram on Tuesday, September 20, that he “crossed the line” with Stroh in reaction to the allegations.

He wrote: “There is a lot of talk about me right now and I want to set the record straight. I used poor judgment when talking to someone other than my wife in ANY flirtatious way. I did not have an affair, however I did cross the line during an unfortunate period of my life. In certain cases it became inappropriate; I have addressed that and taken proactive steps to remedy it with my family.”

“My wife and my family is all that matters to me in this world. Being naive and stupid enough to risk the only thing that really matters to me was the biggest mistake I could ever make. I will never do it again. I take full responsibility. We’ll get through it. And we will get through this together,” Levine said.