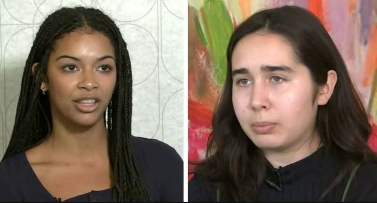 Two UCLA students say they faced a horrific hazing ritual as camp counselors at a summer camp for college alumni. They said the hazing included stripping in front of co-workers and excessive drinking, which led to a sexual assault. Samea Derrick, 19, and Lydia Dixon, 20, filed a lawsuit in Los Angeles County Superior Court against the Regents of the University of California accusing two men of sexually assaulting them at the camp.

Bruin Woods is known for being a student-run Lake Arrowhead summer getaway camp for UCLA alumni and families. For Derrick and Dixon, however, what they thought would be a thrilling experience turned into a nightmare. They alleged that they were subjected to physical and verbal abuse, forced to drink excessively and strip naked. Both left the camp less than a week into the program, which was supposed to last 11 weeks.

Derrick claimed he tried to tell the leaders of the advisory group and those running Bruin Woods about his ordeal, but they did nothing. The two students claimed they had heard rumors about excessive drinking, partying and sex at the camp. Supposedly, their future bosses even sent them a packing list that included fake ID, condoms, and birth control.

The suit claims that Derrick began facing hazing on the way to Bruin Woods. “You stop at this liquor store just before you go up this very windy road, and they give you a Four Loko,” Derrick said, referring to a malt liquor drink. “The goal is to finish the entire Four Loko while climbing the mountain without throwing up.”

Both alleged that they were forced to drink heavily and did not care that they were underage. Dixon said she drank so much earlier in the week that she passed out and she was sexually assaulted in her sleep by a male counselor. “That (first) night, I got really drunk and ended up passing out,” Dixon said. “And that’s when I was assaulted by the returning staff member.”

Dixon said that when he reported the incident, the staff member was kicked out of the camp, but things didn’t get any better. The suit alleges they were forced to perform tasks said to be so-called traditions, including being forced to remove their shoes and place pillowcases on their heads. They were apparently taken into the woods and forced to hold their arms up until they lost circulation.

They were also forced to strip naked in front of everyone and jump down a slide that led to the lake. “I was scared,” Derrick said. “Like, I barely knew these people.” One night at a party, the newcomers found themselves among naked staff members. They were also asked to remove their clothing. “Suddenly, I see every returning employee naked,” Dixon said. “I was so shocked… when I walked into that room, I felt like everyone was like the guy who assaulted me.”

The counselors tried to reassure her that “if I took my clothes off, I would feel much better and that is how they build trust.” Derrick said that she was mugged that night, but her complaint was dismissed. “When I woke up Thursday morning, I was naked in my bed and I was panicking…because I didn’t know what had happened,” she said. After the two students returned, they informed the university’s Title IX office about their experience and even found an attorney.

“Before I came to Bruin Woods, I saw them as an amazing community of people who really loved each other,” Dixon said. “Seeing that’s what they did or what they had to do to get that community made me feel really sad, because I thought it was something that it wasn’t.”

Majoring in political science, Dixon still attends classes in person. She says that she is afraid of meeting her attacker. Derrick studies environmental science and took a quarter from UCLA after she reportedly suffered multiple panic attacks while seeing other camp counselors on campus. She hopes to return soon.

Attorney Scott Carr of Greene Broillet and Wheeler, who represents both Dixon and Derrick, said, “This has been going on for a long time and it needs to stop. You look at fraternities. For a long time, they were hazing, and a lot of this was kept under the radar because of secrecy, because of coercion. Things that people do to keep it from being made public.”

Meanwhile, the university said in a statement, according to the Los Angeles Times, “When we became aware of the alleged incidents earlier this year, they were referred to our Title IX Office and are being handled in accordance with the policies and procedures of the Our top priority is the well-being of our students, staff, and families, and we have strong policies in place to review all reports of misconduct.”