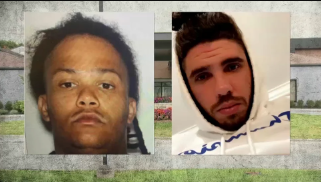 The two men in custody in connection with the Poughkeepsie hotel shooting that killed a Marist College student’s relative Sunday are being investigated for a previous robbery and murder, three law enforcement sources with direct knowledge of the investigation said Monday.

The sources identified the two as Roy Johnson Jr. and Devin Taylor. Johnson is believed to be the Courtyard Marriott shooter, and was charged with murder; both men face criminal weapons charges. No details on that prior case were immediately available, but officials said each has at least one prior felony conviction.

Earlier, a senior law enforcement official said the suspected shooter had a Glock switch on his handgun that made it fully automatic. That gun, which took the life of an innocent bystander, sources said, is believed to have been found on the roof of his car, and a second weapon — an apparent ghost rifle — was discovered in the room both men shared.

Investigators said that the handgun used in the shooting had a clip of 30 bullets, which was empty when it was recovered in the parking lot. It is believed that more than two dozen shots were fired inside and outside the hotel. Glock switches are illegal and essentially turn semi-automatic pistols into fully functioning automatics that federal law classifies as machine guns.

The suspected shooter also had a 30-round high-capacity magazine in his possession, the official said. A search warrant was being executed overnight and was expected to cover their vehicle, in which investigators believed there may have been Tannerite, which is used in long-range target practice and explodes upon impact, according to the senior law enforcement official.

It’s not clear why Tannerite may have been in the vehicle, or what they may have had to do with another firearm, flashbangs and materials “used to make explosives” that the official said had been found in their hotel room. According to the investigation, led by state and Poughkeepsie police along with the county sheriff and the district attorney’s office, the shooter had gone down to the hotel lobby to get coffee Sunday and got into an argument with some hotel staff and others.

He took out the gun and fired, killing the victim in what the chief has called “a random act.” The senior law enforcement official had said Johnson and Taylor were in a hotel room smoking a PCP-like substance prior. Johnson was remanded without bail and Taylor was remanded on $1,000,000 bond. The pair, both reportedly homeless, are next scheduled to appear in court on Friday.

It’s unclear who paid for the men’s room at the Courtyard by Marriott. In a statement, the Dutchess County Department of Community & Family Services said the suspects were not known clients nor were they placed in the hotel by the county.

NBC New York learned Tuesday that the victim killed was Paul Kutz, an accountant and father who lived in the Long Island town of East Northport. Law enforcement previously said that dozens of Marist families were at the hotel Sunday when gunfire erupted and SWAT teams descended on the building.

Sources told News 4 that Kutz was visiting his child at the college, and neighbors said that he was friendly and helpful, and was a proud father.The chaos unfolded over the course of a number of hours at the Marriott on South Road, with officers first responding to the scene at 7:30 a.m. for reports of a shooting and the discovery in the hotel room coming later in the investigation.

Manuals related to making explosive devices were also found in the room, Police Chief Joseph Cavaliere said. The FBI and the Bureau of Alcohol, Tobacco, Firearms and Explosives are assisting police and the district attorney’s office in the investigation. State Police responded as well, though authorities stressed there was no active threat to the public.

The shooting happened in the middle of Marist’s “Family Weekend,” where students and families were invited to participate in three days of activities, including a football game, tailgating and picnic on the waterfront. Marist College acknowledged the tragedy in an email to students Sunday.

“This morning, authorities made us aware of the tragic, fatal shooting of a family member of a Marist student at a local hotel several miles from campus,” the college wrote. “Our deepest condolences go out to the family, and we are offering the full support of the Marist community.” An investigation into the shooting is ongoing.