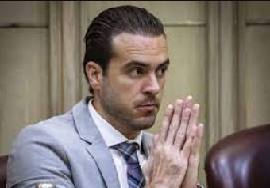 “Two lives were destroyed by simple road rage, a situation we see all too often on our streets and on streets across the country. I am so proud of the efforts and hard work of Assistant State’s Attorneys Shawn Abuhoff and Gabriela Alfaro who has brought a measure of justice to the surviving family of Mr. Hernández.”

The jury took more than four hours to deliberate. There was no emotion on Lyle’s face as the judge read the verdict. Across the room, Hernandez’s wife was openly crying. “The Hernández family is grateful that the first phase of this three and a half year process has come to an end with today’s conviction.

It has been and will be a very difficult world for them without Juan Ricardo. He was a cheerful and caring man who loved his family and enjoyed life,” the victim’s attorney, Zena X. Duncan, wrote in a statement. “No measure of justice will correct the injustice that occurred on that street that day of March 31, 2019, when Pablo Lyle hit Juan Ricardo and left him dying where he lay.

Therefore, the family is ready for the next phase of this process and is looking forward to sentencing.” Lyle’s attorney was silent as she left the courthouse after the verdict. Security camera video showed Lyle running toward Hernandez and punching him in the face. Hernandez died after hitting his head on the pavement.

In court on Monday, Lyle announced that he would not take the stand in his own defense before attorneys presented closing arguments for him. Defense attorneys argued that Hernandez started the incident when he got out of his car and hit the window of Lyle’s car at an intersection.

They also argued that Lyle was defending his family against what he thought was a threat posed by Hernandez. But prosecutors said Hernandez had walked away from him and was returning to his car before the hit. They also said three witnesses testified that Hernandez had his hands up in a defensive posture and that there was no reason for Lyle to hit him at the time.

“I know he didn’t do it intentionally, but he must face the consequences,” the victim’s stepson told reporters outside the courtroom. “There are people who have said that he should not have gotten out of the car. No one has the right to kill anyone and take their life.”