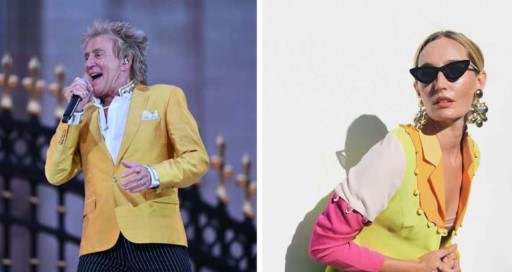 Legendary English singer Rod Stewart has announced that he will welcome his second grandchild this year in April! Rod, who has eight children by five women, has a daughter, Ruby Stewart, who is now expecting a baby. He had announced the joyous news on his Instagram page with more than 1.2 million followers.

In his stories, he reposted Ruby’s gender reveal video where the family is elated that the baby will be a boy, which his daughter had confirmed in the pregnancy announcement. Ruby is her daughter from former partner Kelly Emberg, a model. Ruby had posted the ultrasound of the fetus on her social media announcing her pregnancy.

She had also stated that she couldn’t wait to give birth and embrace motherhood. Daily Mail reported that she is expecting the child with her boyfriend Jake Kalick. Rod had posted the wholesome family gender reveal moment from his Christmas party last week, where he’s the one to reveal the gender of an envelope with the rest of the family absolutely delighted.

Ruby’s announcement was a short ultrasound clip of her, which was captioned: “Of all the things that happened in 2022, you were by far the most beautiful… We can’t wait to meet you… Baby Kalick It will arrive in April.” Her family also appeared in the comments to offer her love and support to the mother-to-be. Rod’s wife, Penny Lancaster, had commented: “I can’t wait to meet him.”

Wow! So happy for you.” Ruby’s half-sister Renee Stewart had also posted a comment on the post expressing her happiness for the couple, saying, “Love you guys!” This is Rod’s second grandchild, the first being Delilah by his daughter Kimberly with his partner Benicio Del Toro. Stewart also has a son, Sean, by his first wife, Alana. He later married Rachel Hunter, whom he had divorced in 2006.

They share a daughter Renee and a son Liam. His third and current marriage is to former model Lancaster, with whom he shares two sons, Alastair Wallace and Aiden Patrick. Rod is also the father of Sarah Streeter, whom he had in his teens. She was raised by her adoptive parents.