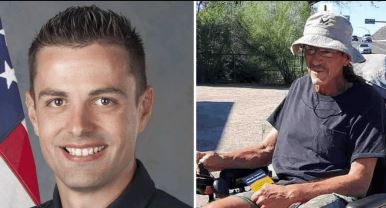 A former Arizona police officer who fatally shot a man in a wheelchair in November 2021 has been charged with involuntary manslaughter, according to court documents released Thursday, August 25. A police officer named Ryan Remington was fired from the Tucson Police Department last year for using Excessive Force. He was charged with recklessly causing the death of 61-year-old Richard Lee Richards.

According to The Daily Mail, Richards was shot nine times by police after he allegedly stole a toolbox from Walmart. Richards reportedly showed a store clerk a knife when asked for a receipt for the product. The former police officer, while showing the clerk the gun, said, “Here’s your receipt.” Video footage showed the man in a wheelchair driving through the parking lot from Walmart to the nearby Lowe’s, where two officers confronted him and ordered him to stop. A few seconds later, Ryan Remington can be seen unloading his gun on the accused robber.

The video footage shared by Daily Mail shows store security following Richards across the parking lot to recover the stolen good. Confronting the Walmart worker, Richards reportedly said, “If you want me to put down the knife, you’re going to have to shoot me.” Cops were then called in. Remington can be heard saying, “Do not go into the store, sir” whereas, the other cop can be heard yelling, “Stop now. You need to stop.”

Remington’s bodycam footage shows him pulling out his gun as he began firing his service weapon from behind until Richards tumbles over and falls out of his wheelchair. Security footage from Lowe’s showed three officers attending to Richards but he soon succumbed to his injuries. According to Daily Mail, the former Arizona cop has been ordered to be photographed and handcuffed at the Pima County Superior Court after his indictment. He will be arraigned on the manslaughter charges on August 31.

A lawyer for Richards’ family named Rick Resch shared that Richards’ family was relieved that Remington will finally stand trial. “It has been a long and difficult past nine months for Mr Richards’s family, but they are relieved that former officer Ryan Remington has been indicted and will face the prospect of justice for the shooting and killing of Mr Richards,” said the lawyer. Remington’s lawyer Mike Storie, on the other hand, told KVOA, “I don’t want to get into legal arguments but it’s a legal fiction. So, I’ll be very interested to read the grand jury transcript and find out what went on in that room when I was not present.”

Storie in the past said, “He did have a taser, but in his mind, he couldn’t use it because he didn’t feel he had the proper spread to deploy it, with the wheelchair between him and Richards.” The accused shoplifter reportedly battled drug addiction and was in prison most of his life.