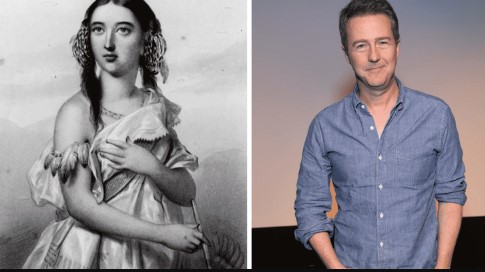 Appearing on the PBS show ‘Finding Your Roots’, Edward Norton learned that he was a direct descendant of Pocahontas. He also discovered that his ancestors owned slaves, which made him “uncomfortable” with the idea. His twelfth great-grandmother, Pocahontas, is hailed as a Powhatan heroine in the history books.

The ‘Fight Club’ actor, 53, discovered that his family owned slaves to host and historian Henry Louis Gates Jr, prompting the star to declare: “These things are uncomfortable.” Taking a closer look at celebrities and their family lineages, season 8 of the show kicked off with the Golden Globe winner, who most recently appeared in ‘Glass Onion: A Knives Out Mystery.’

Pocahontas  Cause of Death

Norton was surprised to hear about his family history, especially when he discovered that Pocahontas, a legendary historical figure associated with the colonial settlement of Jamestown in Virginia, was his 12th great-grandmother. “This is as far as you can go, unless you’re a Viking,” the actor said in the episode, according to NBC Philadelphia. The ‘Primal Fear’ star said:

“It makes you realize how small of a human story you are.” Pocahontas’s marriage to tobacco planter John Rolfe in 1614 made Norton a direct descendant of Pocahontas.She reportedly died in 1617, three years later from an unspecified illness.When she learned more facts, she acknowledged that it it made him feel “uncomfortable”.

The actor was then shown a photo of a husband and wife and their five daughters, the oldest of whom was just 10 years old, according to Metro. Gates, who is also a Harvard professor, revealed to Norton that his ancestors previously owned the family as slaves.

Norton explained: “When you get away from the census counts and personalize things, you’re talking about, possibly, a husband and wife with five girls, and these girls are slaves. Born into slavery.” He then added emotionally, “Again, when you read ‘eight-year slave,’ you just want to die.” According to History TV, Native American woman Pocahontas was born around 1595.

Chief Powhatan, head of the tribal nation of the Powhatans which at its height included about 30 Algonquian communities in Virginia’s Tidewater According to historians, Pocahontas had no indication that she would become a popular icon, but was involved in a sequence of incidents with Captain John Smith and John Rolfe that forever connected it to America’s colonial history when the first European settlers appeared on Powhatan land to start the Jamestown Settlement.

Colonists came to regard Pocahontas as an important messenger from Powhatan. In 1608, he helped negotiate the successful release of Powhatan prisoners and regularly delivered food to starving colonists. However, tensions between the colonists and the Native Americans persisted.

In 1610, Pocahontas may have married a Native American named Kocoum. After that, she stayed away from the English until 1613, when she was tricked into boarding Captain Samuel Argall’s English ship and taken hostage during the First Anglo-Powhatan War.

She was held captive and cared for by a preacher named Alexander Whitaker while residing in the town of Henricus. She there she learned the English language, English culture and Christian beliefs. After converting to Christianity, she Pocahontas was baptized and given the name Rebecca.

Ella Pocahontas met John Rolfe, a widower and tobacco plantation owner, while she was a prisoner. The couple made the decision to marry, perhaps motivated as much by love as by political considerations. However, Rolfe, a devout Christian, struggled with the decision until Pocahontas converted to Christianity.

In April 1614, she married Rolfe, and the event was seen as a crucial step in the process of improving relations between the colonists and the Native Americans. In fact, the union marked the beginning of a period of tranquility in the area.

Sir Thomas Dale traveled to England in 1616 to mobilize financial backing for the Virginia Company, a company owned by wealthy Londoners that had provided funds for the Jamestown colony. Pocahontas was referred to as Lady Rebecca Wolfe and treated like a princess in London. She went to plays and dances, and even met the royal family.