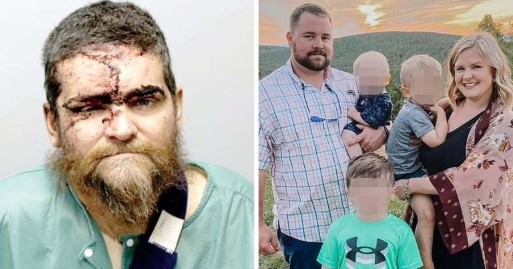 Two Tennessee parents were killed on Christmas Day and the suspected drunk driver may now be required to pay child support for their now orphaned children. Patricke Conley, 42, was arrested when he crashed into a mailbox, lost control of his car and drifted into the lane where Dustin and Brittany Dillard, both 33, and their three young children were traveling.

According to Conley’s arrest report, his vehicle rose into the air before striking Dillards’ Jeep Wagoneer SUV. When the police came, they discovered the SUV had overturned with Dustin and Brittany already dead and their sons badly hurt. Two counts of vehicular homicide and three counts of vehicular assault were brought against Conley.

The arrest document states that Conley’s car smelled of alcohol and several “Bud Light beer cans” were found at the spot as reported by Daily Mail. A bill that requires Tennessee drunk drivers to pay equivalent amounts to child support if they cause a parent’s death was unanimously approved by the Tennessee Senate in April 2022 which will be applied in Conley’s case.

The amount of payments which would be determined by the court would be paid until the child turned 18. Conley was also accused by the police of driving while being intoxicated and having open containers. In addition to being charged with violating this probation, he was previously given an eight-year prison term for drug-related offenses.

On December 29, 2022, Conley arrived in court in a wheelchair and with a significant facial wound. His defense attorney argued that he was not guilty. Two men saw the accident from their home and immediately went to the Dillards’ overturned vehicle. “I heard an explosion outside,” a witness named Charles told The National Desk.

“My son, he came down to me and he said, ‘There [were] two vehicles that were flipped over on their top,’ and I went ahead and grabbed my jacket and I ran outside,” he added. Before hearing the boys in the Dillards’ vehicle, Charles first hurried to console Conley who was in distress. “I had my handgun in my pocket, so I took the butt of it, and I smashed the window,” he said.

Until the cops showed up, Charles was unable to get the three children out of the car. According to Bradley County Schools, the three boys, later identified as Preston, Pierce and Pryor were admitted to a hospital and are expected to make a full recovery. In Cleveland, Tennessee, Brittany was a teacher at Walker Valley High School when she tragically died.