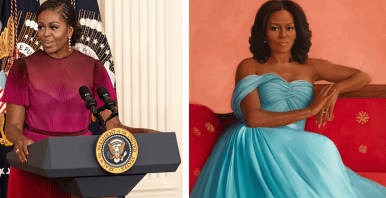 On Wednesday, September 7, Barack Obama and Michelle Obama visited the White House once again to unveil their official portraits. The 58-year-old former first lady looked stunning as she attended the event in a sheer pink and red ombre dress with a cinched waist and pleated skirt. Michelle wore an ankle-length gown that was completely sheer at her bodice, showing off a sweetheart neckline below it and flowing and pleating at the bottom half. She added sparkling, dangling diamond earrings and a pair of burnt red pointed toe shoes to her ensemble.

Barack Obama joined Michelle, looking dapper in a tailored suit, a blue and white striped shirt and a blue tie tucked under her jacket. First Lady Jill Biden also looked stunning in a white pantsuit, while President Joe Biden wore a navy blue suit with a white shirt and pale blue tie. The portraits, which were revealed, showed Michelle in a stunning pale blue off-the-shoulder gown with a ruched, low-cut neckline and a long flowing skirt. As for Barack, she was wearing a black suit with a white shirt and a gray tie.

The inauguration also marked the first time the Obamas have returned to the White House together since 2017. This latest event appears to be a special one, as it represented a return to what has been a longstanding tradition between presidents. The inauguration was also the first since 2012, when the Obamas hosted George W Bush and Laura Bush. In particular, Donald Trump broke tradition by refusing to welcome the Obamas while he was president.

Michelle Obama made a subtle reference to Trump in her speech, adding: “Traditions like this are important, not only for those of us who hold these positions, but for everyone who participates in and observes our democracy.” He noted that the tradition has been for presidents to leave the White House in a peaceful transition of power and “once our time is up, we’ll move on, and all that’s left in this holy place is our good efforts and these portraits.” She went on to describe how difficult it was for her and her husband to hold the position of president considering their previous lives.

The former first lady herself said: “What we are seeing is a reminder that there is a place for everyone in this country. Because, as Barack said, if the two of us can end up in the walls of the most famous address in the world, then… it’s very important that all little kids who doubt themselves believe that they can too. That’s what this country is about. It’s not about blood, pedigree or wealth.”

Meanwhile, in a ceremony in the East Room, President Joe Biden declared that Obama will be “one of the greatest presidents in history.” “Jill and I have been looking forward to hosting events at the White House for a long time after the pandemic, and it is only fitting that we can do so now by revealing the portraits of two dear friends and two great Americans who are still very strongly in the hearts of the people. American, portraits that will hang on the walls of this sacred place, the home of the people, forever, and a reminder to all here and now to those who will come to power that hope and change matter,” Biden remarked.